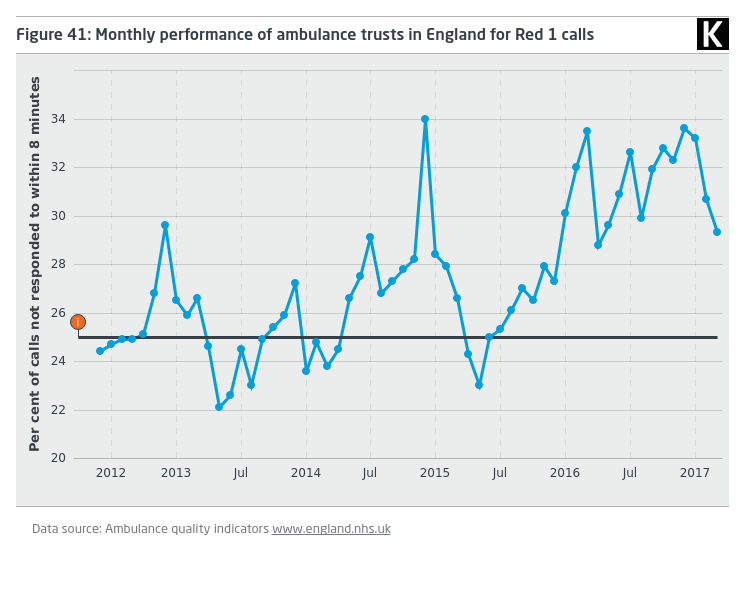 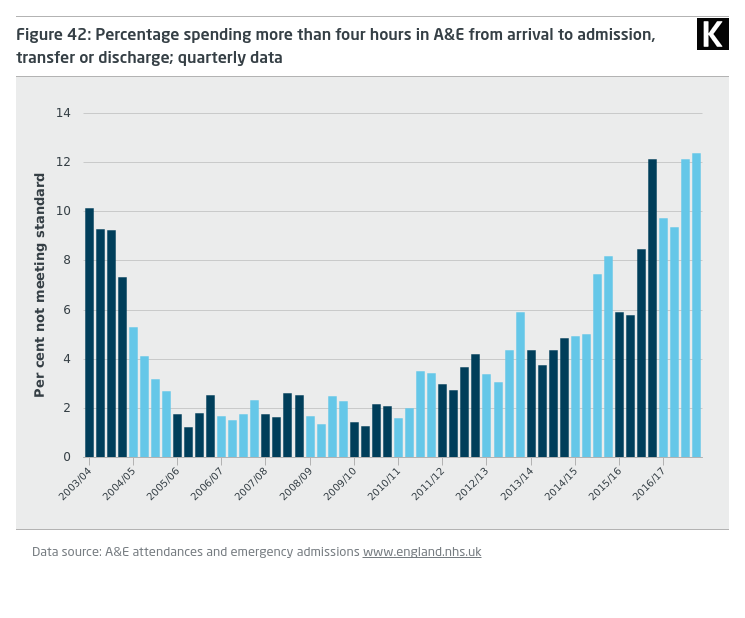 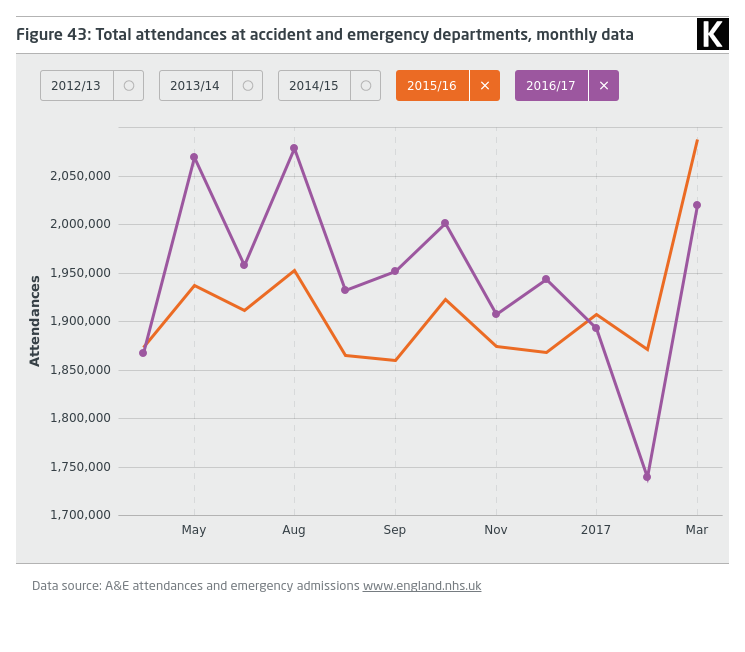 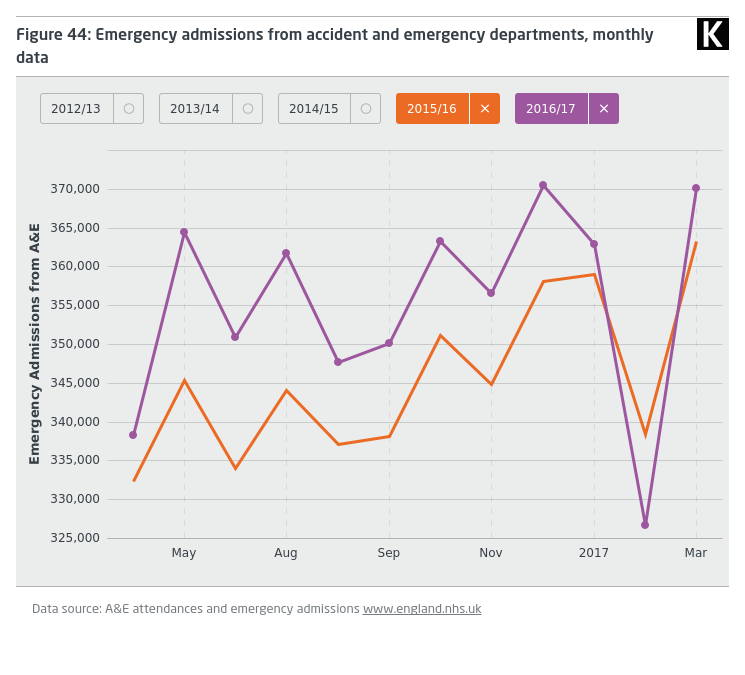 Share
Save image
Figure 45: Patients waiting more than four hours in A&E from decision to admit to admission, monthly data 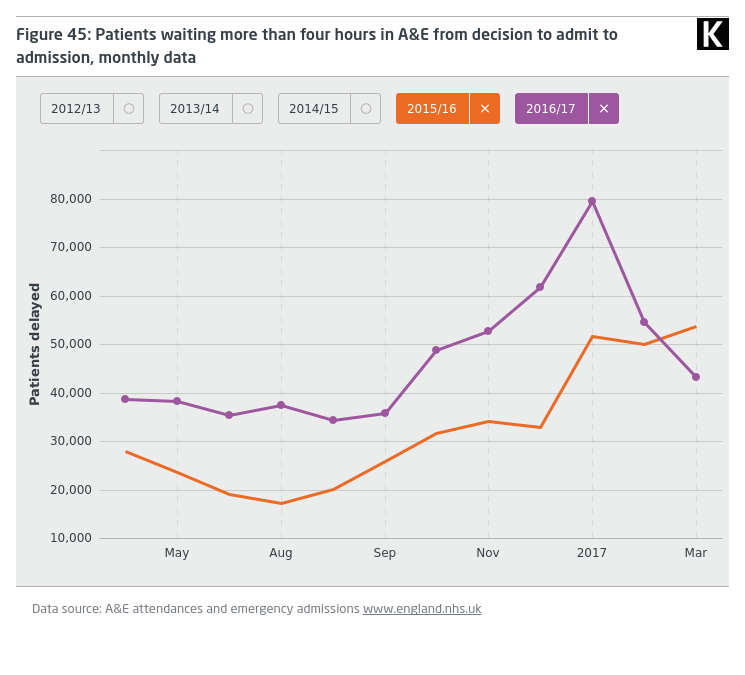 Share
Save image
Figure 46: Per cent still waiting 18 weeks to begin treatment / having waited more than six weeks for diagnostics 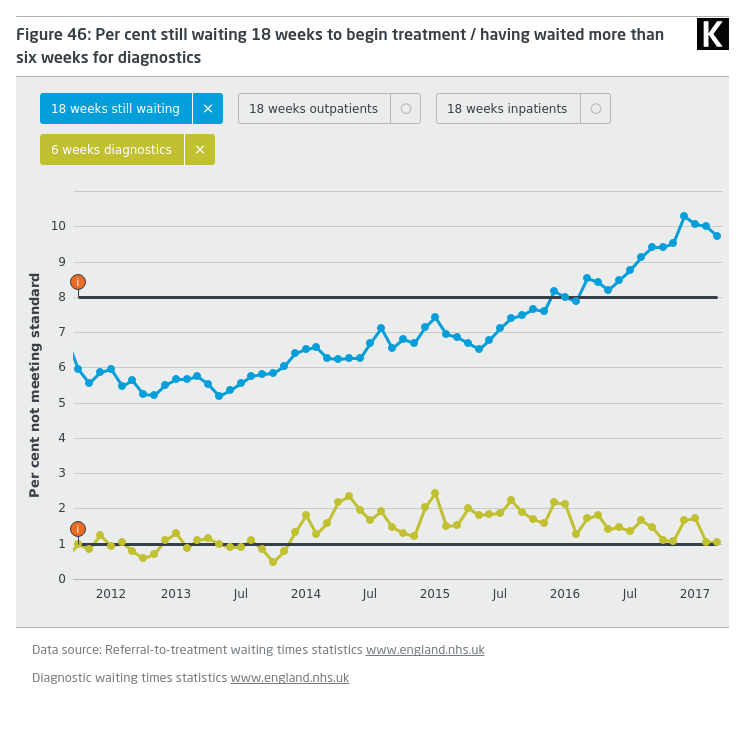 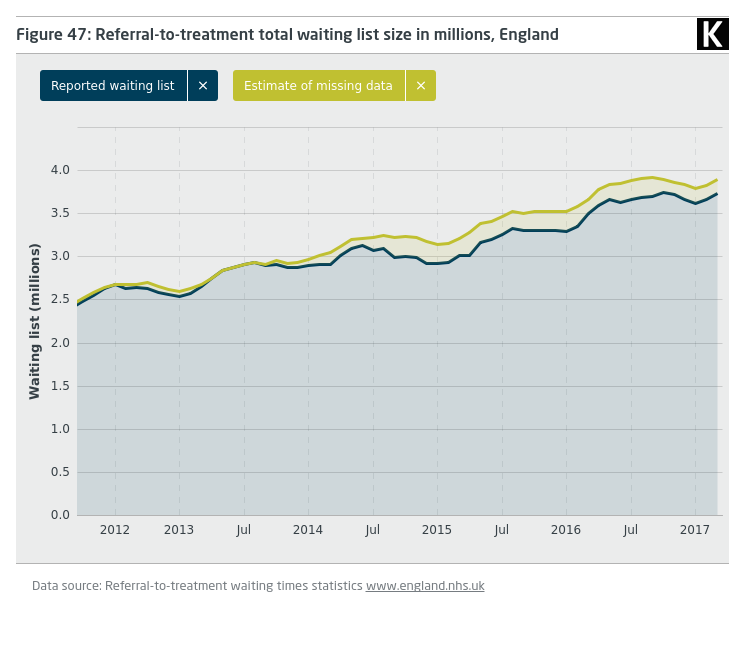 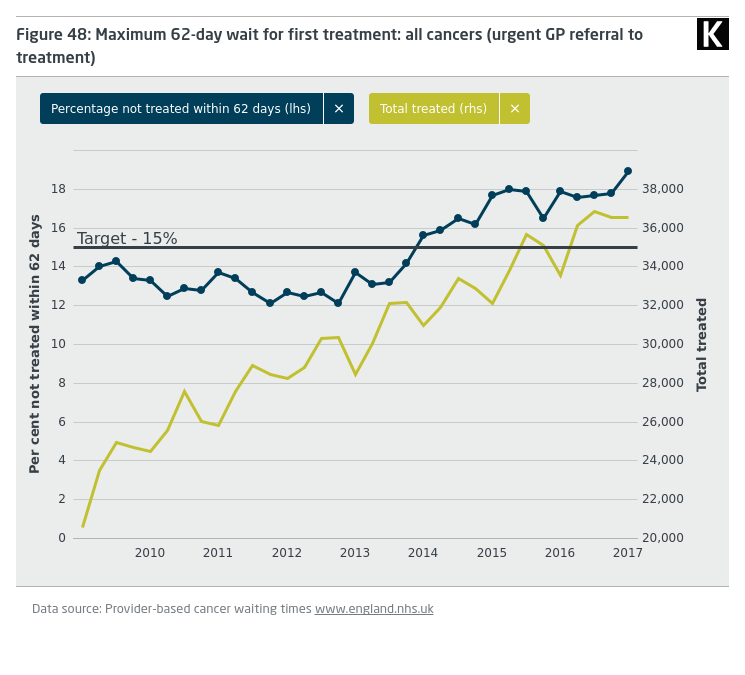 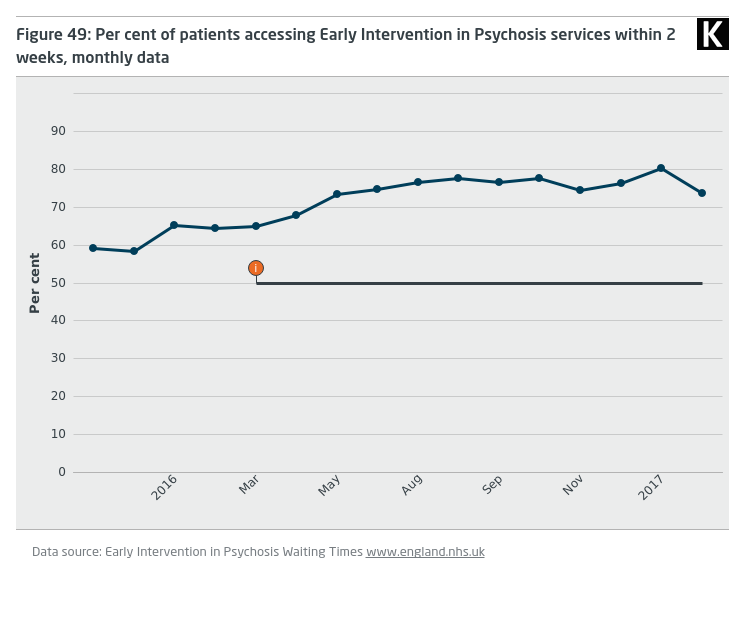 Share
Save image
Figure 50: Per cent of patients accessing IAPT services within 6 and 18 weeks, monthly data 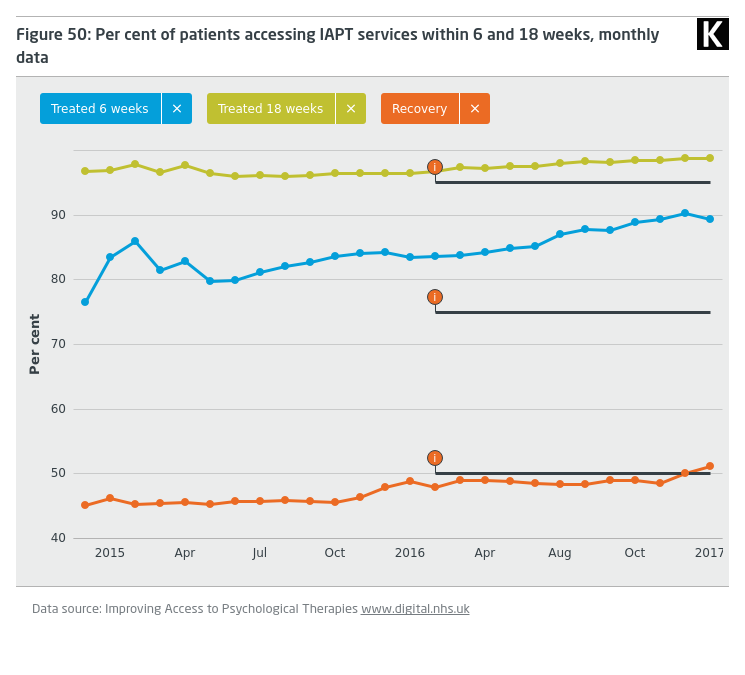 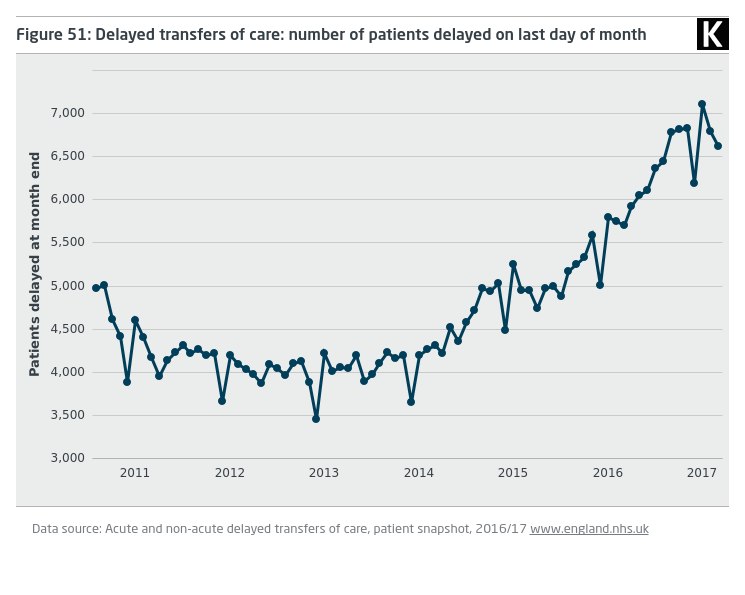 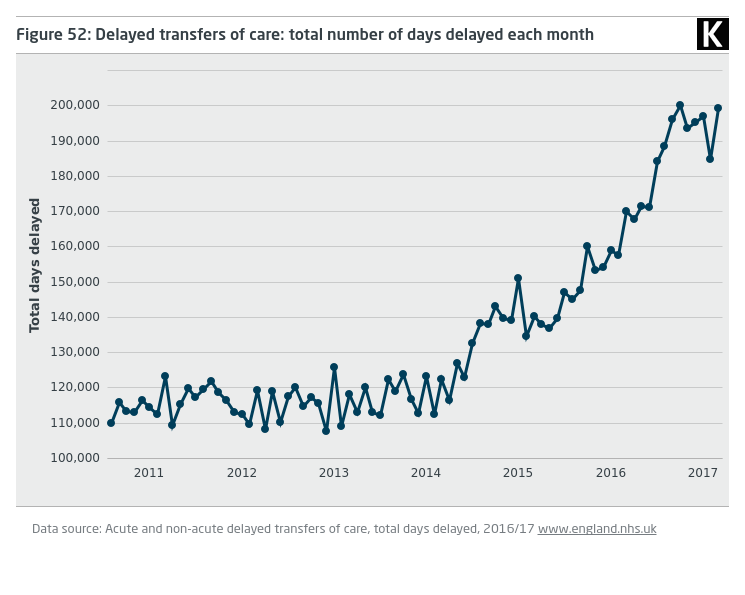 In this section, we have used data from ResearchOne, a health and care research database created using records held on TPP’s SystmOne, one of the main providers of information systems in general practice in England, to compare the amount of activity experienced in a sample of 202 practices (approximately 2.7 per cent of all practices in England) in 2016/17 with the same period in 2014/15. Our previous report on this data (QMR21) covered the first two quarters of 2016/17, and this report adds quarters three and four to that analysis.

Over the same period, the average number of patients registered with each practice in our sample increased by 6.2 per cent. This increase in was lower than the national average between 2014/15 and 2016/17 (7.2 per cent). The increase in the national average is being driven by two factors in particular – the continuing rise in the number of patients registering in England (up 2.4 per cent) and a reduction in the number of practices operating in the country (from 7,875 in 2014 to 7,527 in 2016) as practices merge. 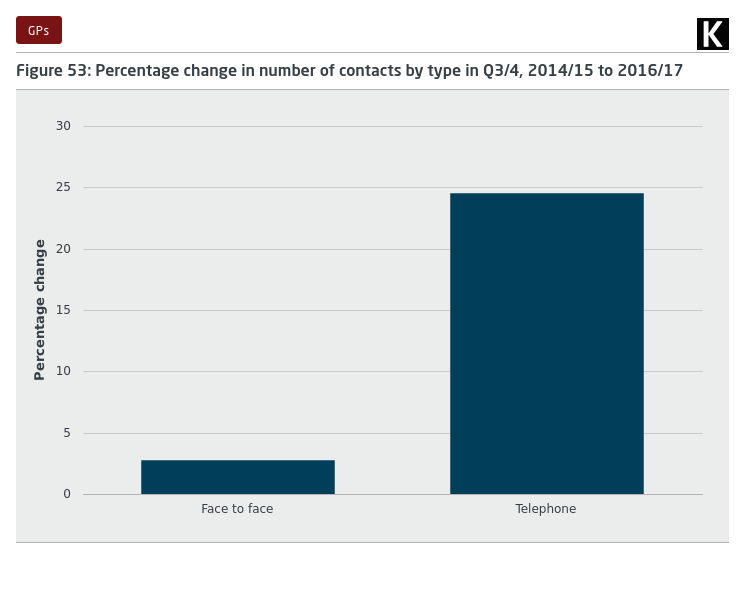 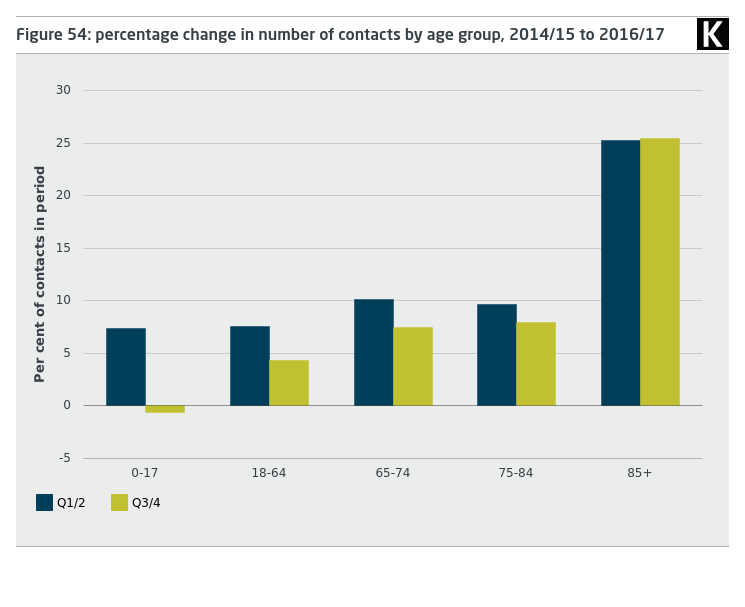 It should be noted that although growth in the number of contacts with people in older age groups was highest, the majority of contacts (approximately 55 per cent) continue to be with people aged 18–64 .

At the same time as the use of general practice has increased, the number of GPs has been largely steady, with a marginal drop between 2015 and 2016 (Figure 55). (The number of GPs in the years prior to 2015 cannot be compared to the data for 2015 and 2016, as there was a significant change in the way the data was collected). 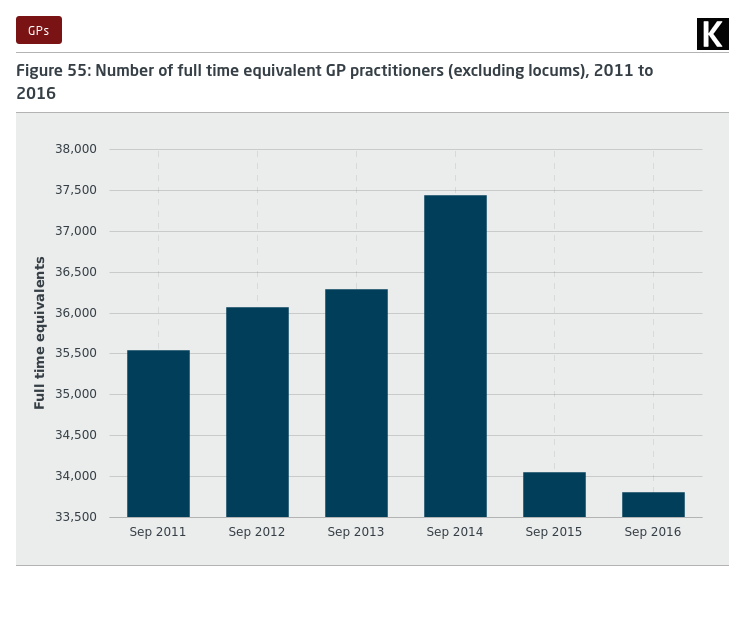 There were increases in the number of nurses employed in primary care and the number of ‘direct patient care’ staff (such as health care assistants, pharmacists and allied health professionals) between 2015 and 2016, with a 2.8 per cent increase in nursing full-time equivalents (FTEs) and a 9.4 per cent increase in direct patient care staff FTEs (Figure 56). 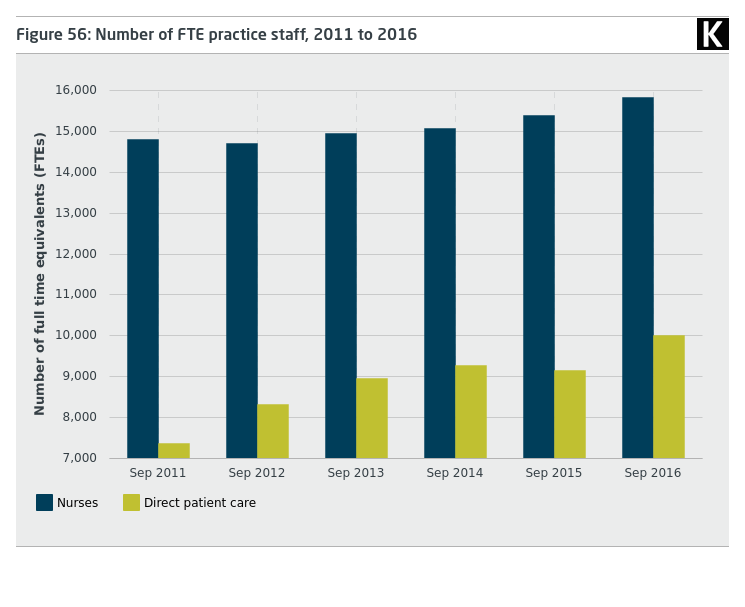 These changes in staffing at the national level are not yet showing up in our activity data sample. The share of activity by different staff groups hasn’t changed significantly in the past three years, with GPs undertaking around three-quarters of the contacts and nurses around a quarter. 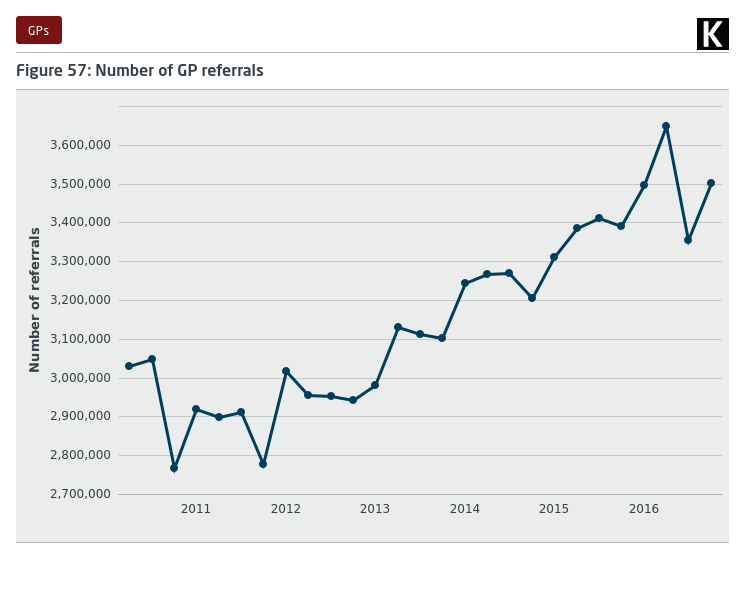