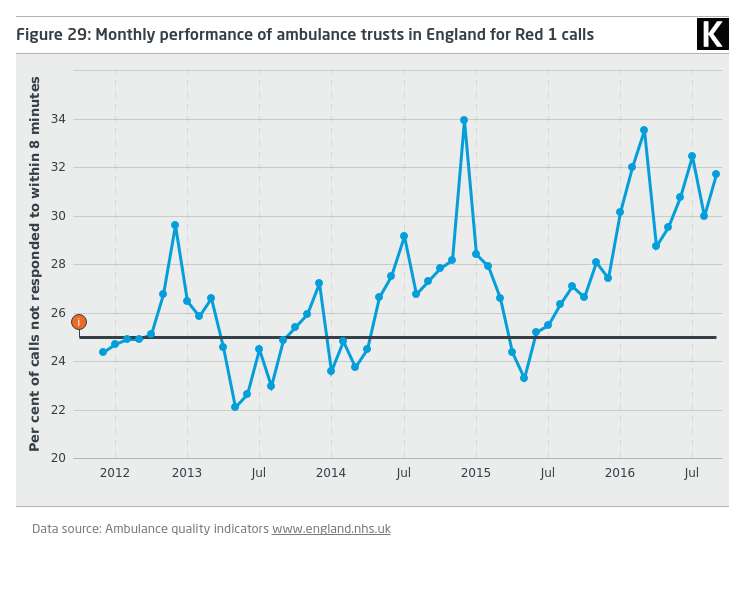 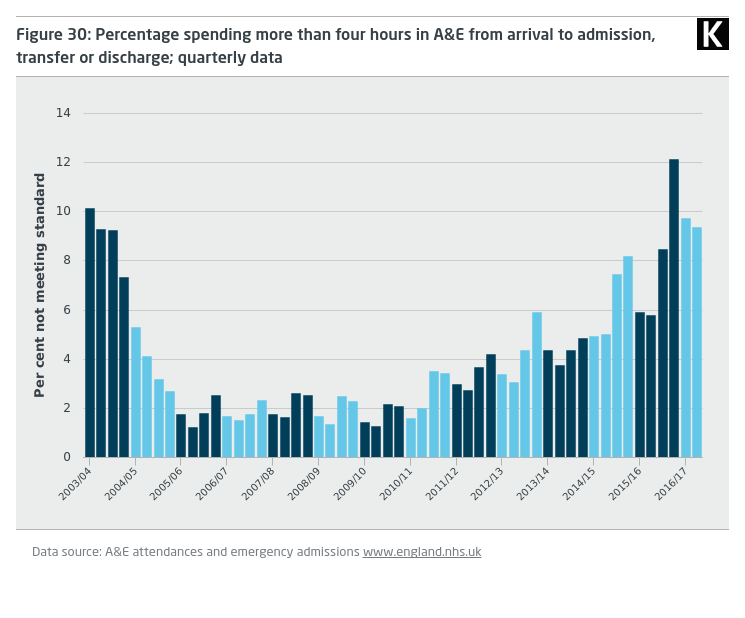 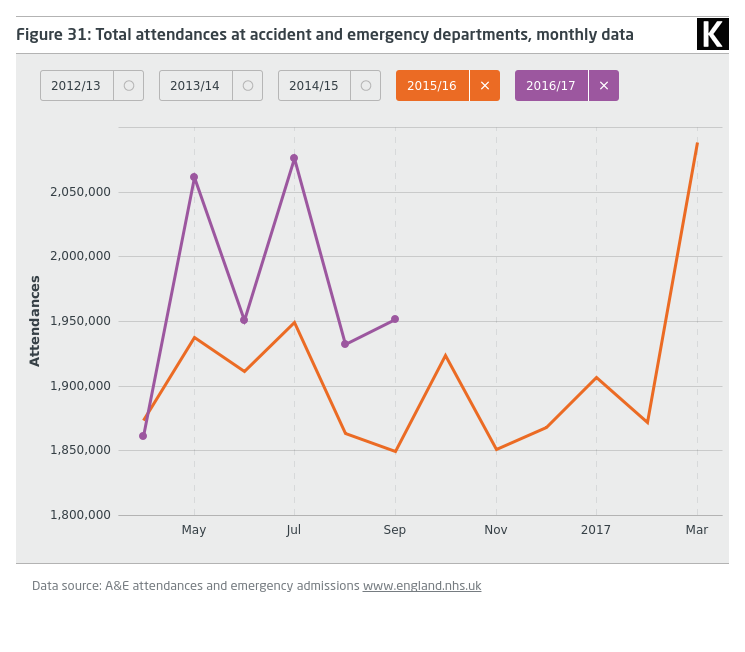 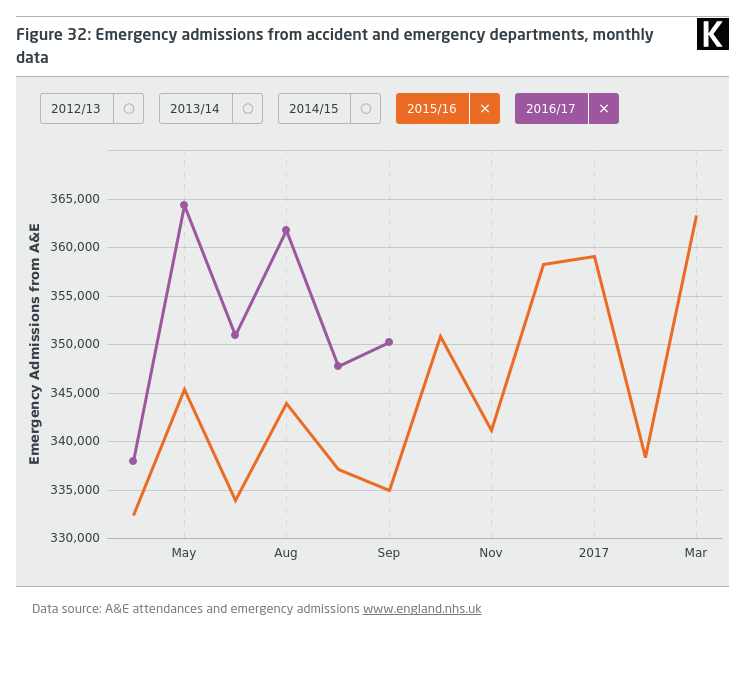 Share
Save image
Figure 33: Patients waiting more than four hours in A&E from decision to admit to admission, monthly data 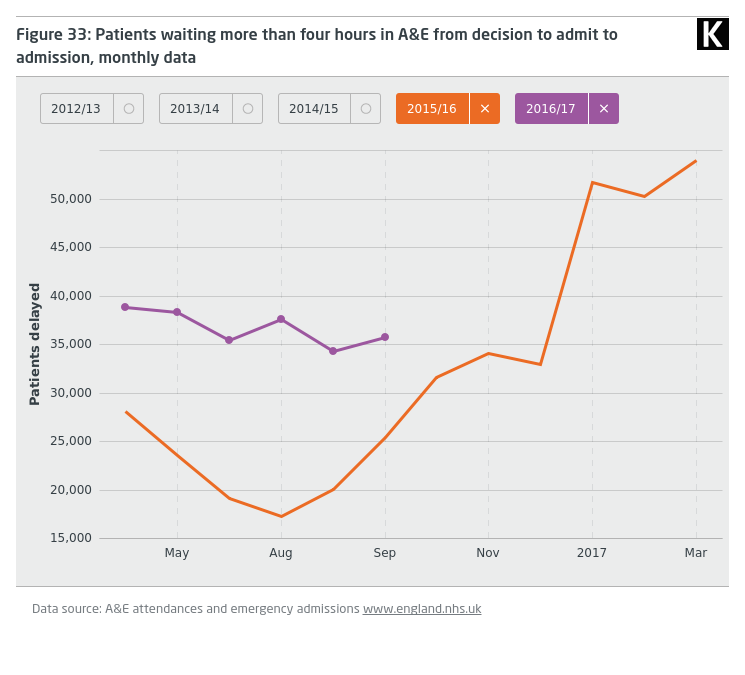 Share
Save image
Figure 34: Per cent still waiting 18 weeks to begin treatment / having waited more than six weeks for diagnostics 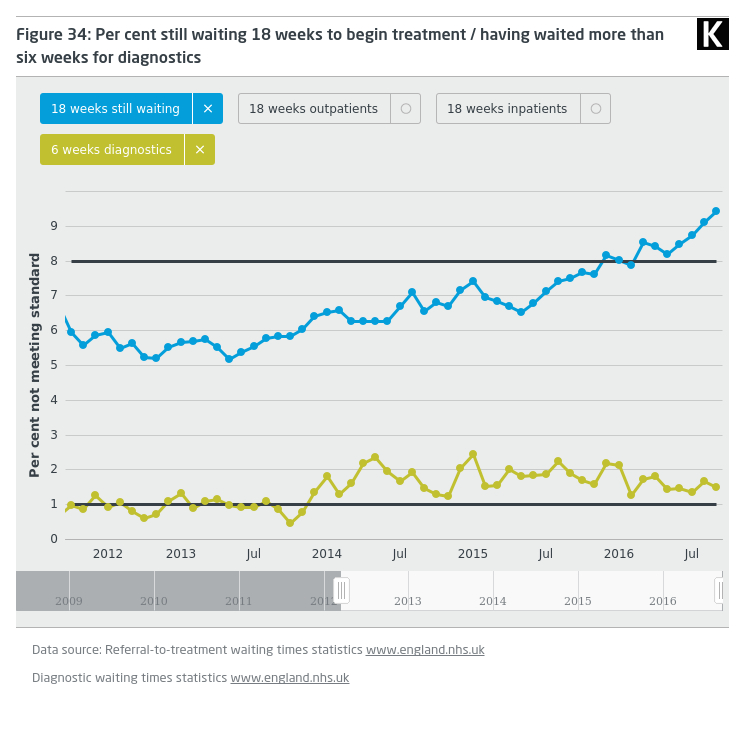 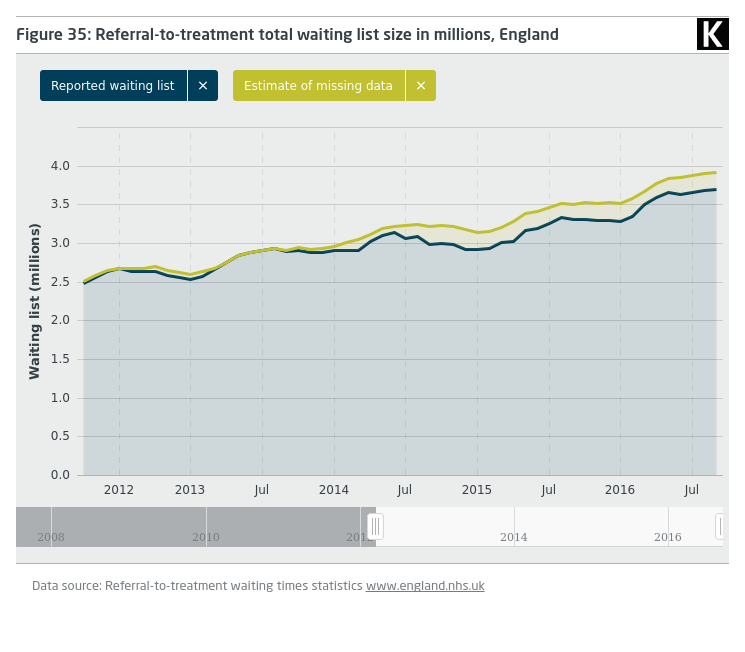 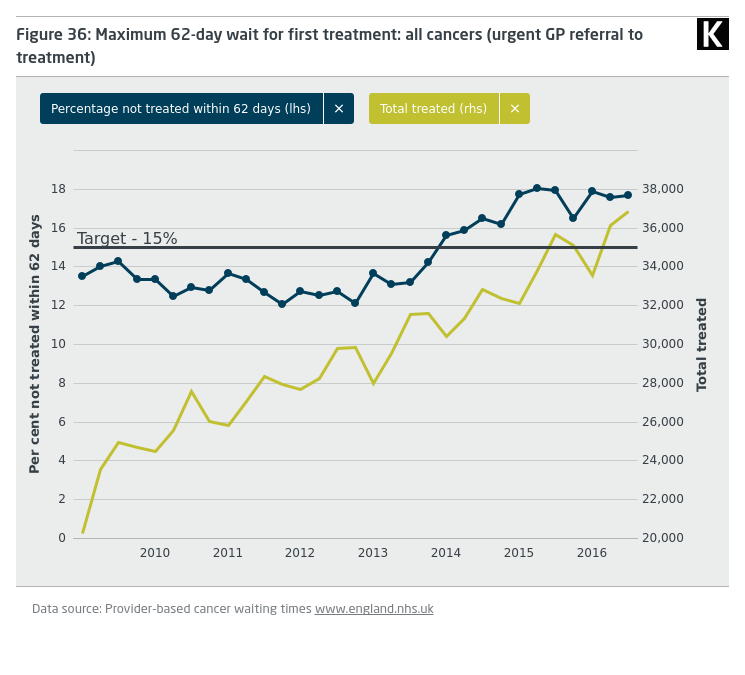 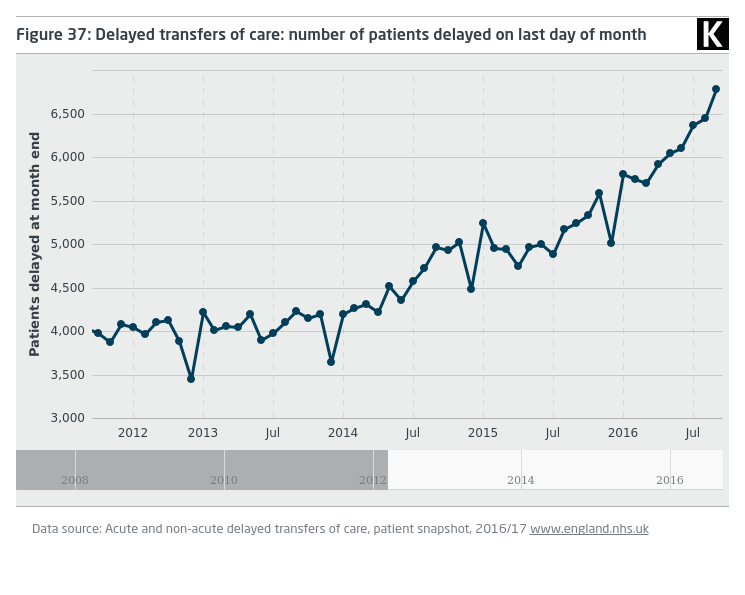 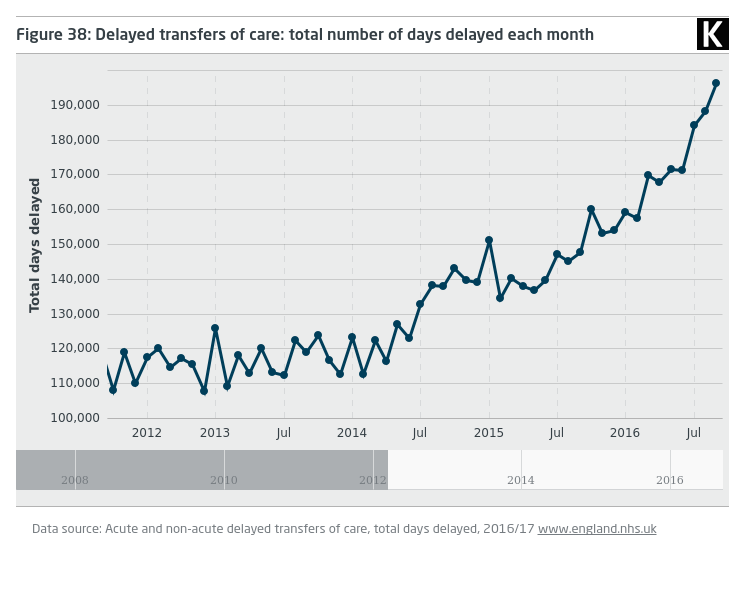 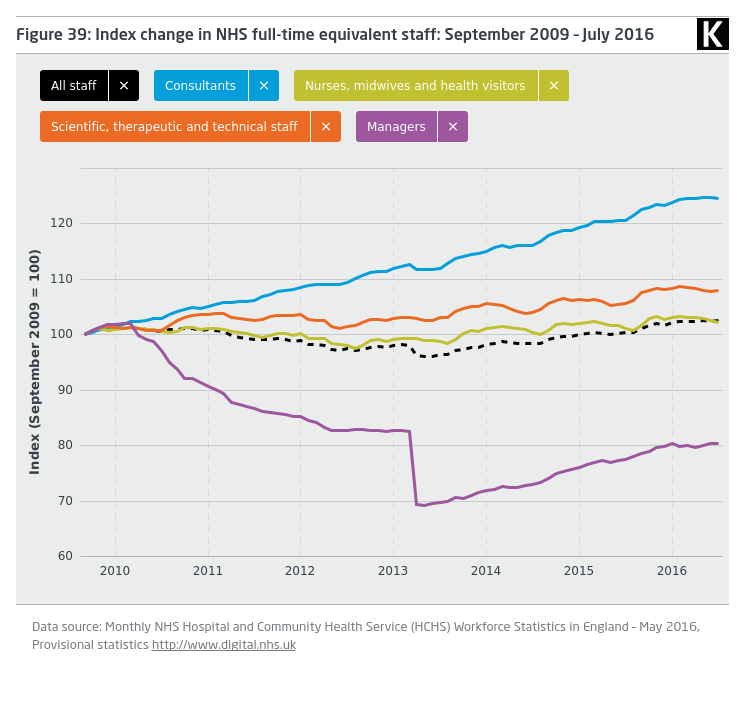 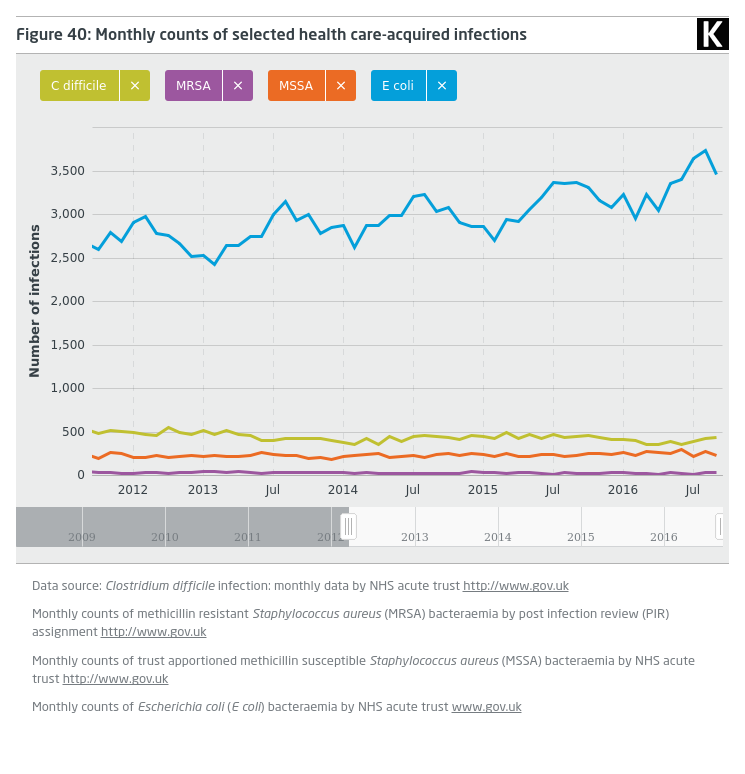 In this section, we have used data from ResearchOne, a health and care research database created using records held on TPP’s SystmOne, one of the main providers of information systems in general practice in England to compare the amount of activity experienced in a sample of 202 practices (approximately 2.5 per cent of all practices in England) in the first two quarters of 2016/17 with the same period in 2014/15.

Our sample shows the number of patient contacts with GPs has changed significantly over the past two years, with a 9.9 per cent increase in contacts with patients in quarters one and two of 2016/17 compared to the same period in 2014/15. The increase in activity is greater in telephone contacts (an increase of 36.6 per cent) than face-to-face contacts (an increase of 6.1 per cent) (Figure 41). Part of this overall increase in activity can be attributed to an increase of approximately 4.6 per cent in the registered patient list size of the practices in our sample over the same period.

Breaking this activity down by age of patient, the data suggests that, although in most age groups there has been an increase in the number of contacts with clinical staff of around 9 per cent between quarters one and two 2014/15 and quarters one and two 2016/17, there was much higher growth for patients 85 and over, with 26 per cent more contacts over the same time period.

If we consider the number of appointments per patient seen (ie, the contacts for people who have had a face-to-face or telephone contact in each practice within the period studied, not the number of patients on each practice list), we can see that the largest growth in number of contacts has come in those aged over 75 (Figure 42). 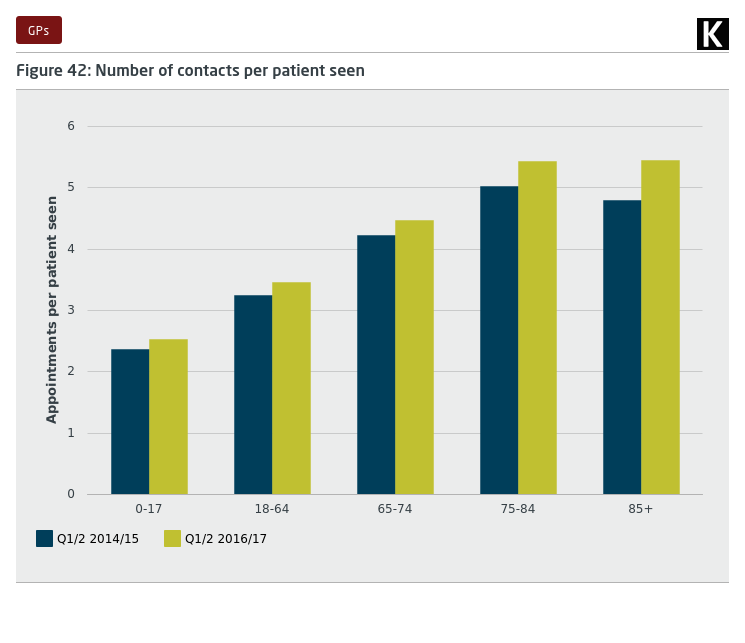 GP referrals to secondary care are growing (Figure 43) at a rate that outstrips population growth. While this causes increased activity for secondary care, it also generates additional work for general practice both in making the initial referral and following up tasks once the patient has been seen in secondary care.