Numbers of C difficile infections decreased over the latest quarter, from 490 in March 2015 to 473 in May (Figure 21). And there continue to be low numbers of MRSA infections; in May 2015 there were 30.

The number of reported E coli infections continues to be subject to large seasonal variations. In the latest quarter, numbers increased – an expected seasonal pattern. 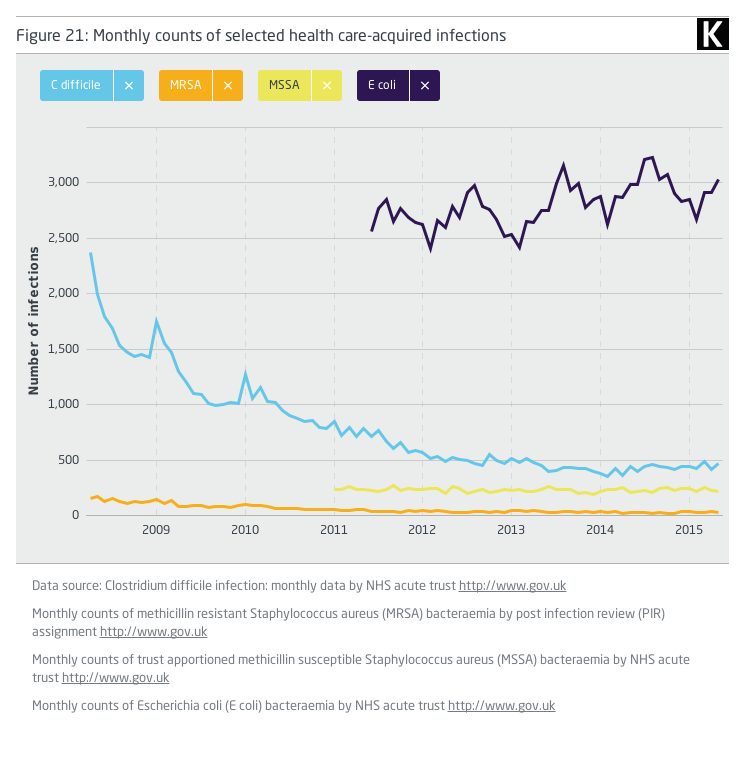 The total full-time equivalent (FTE) number of staff working in hospital and community health services (excluding, for example, general practitioners) was more than 1.077 million in March 2015. There have now been four months in a row of continuous growth in total staff numbers.

Compared to March 2014, there has been an increase in all staff of more than 17,550 FTE posts (1.7 per cent) (Figure 22). This increase has been across all staff groups: consultant numbers have increased by almost 4 per cent; total managers by 1.7 per cent; nurses, midwives and health visitors by 1.3 per cent and scientific, therapeutic and technical staff by 0.7 per cent. 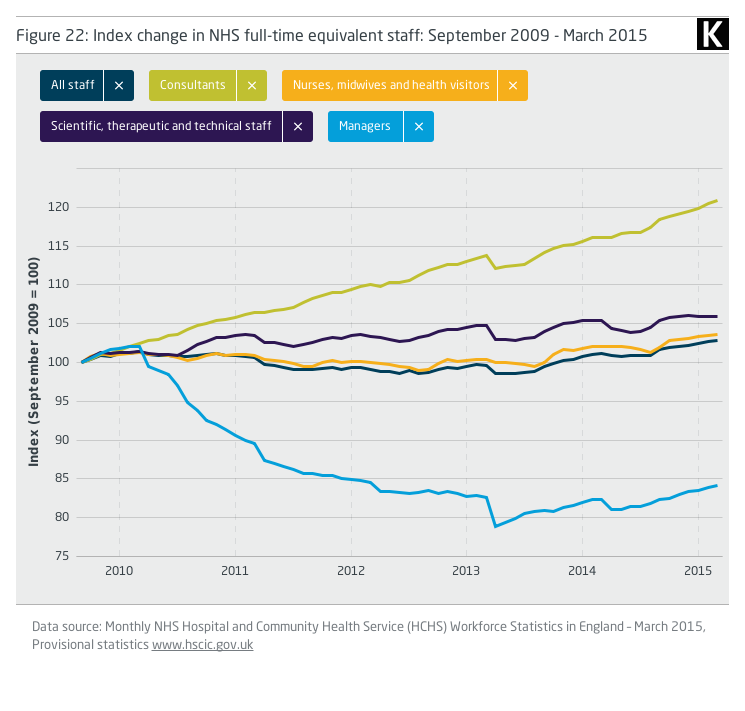 Having reinstated contractual penalties for missing referral-to-treatment waiting time performance standards in December 2014, these were dropped in 2015 as part of a ‘managed breach’ policy to deal with patients still waiting to be seen and waiting longer than 18 weeks.

This policy has now gone one stage further, following Sir Bruce Keogh’s review of waiting time measures, with the removal of the admitted and non-admitted waiting time targets (NHS England, 2015). Though the data will still be collected, only the incomplete waiting time target will be used for performance management from June 2015 onwards.

The latest figures show continued, but reducing, breaches of the previous target for admitted (inpatient) patients and a return to target performance for non-admitted (outpatient) patients up to and including May 2015 (Figure 23).

The proportion of admitted patients waiting longer than 18 weeks reduced to 11.8 per cent, the second month in a row that performance against this (now abolished) target improved.

The proportion of non-admitted patients waiting more than 18 weeks reduced to 4.4 per cent, the best performance against this (now abolished) target for 10 months.

The number of patients still waiting to begin their treatment (both admitted and non-admitted) reduced to 6.5 per cent. This suggests the managed breach is having some positive impact.

The proportion of patients waiting more than six weeks for a diagnostic test has now missed its target (1 per cent) for the past 18 months in a row. 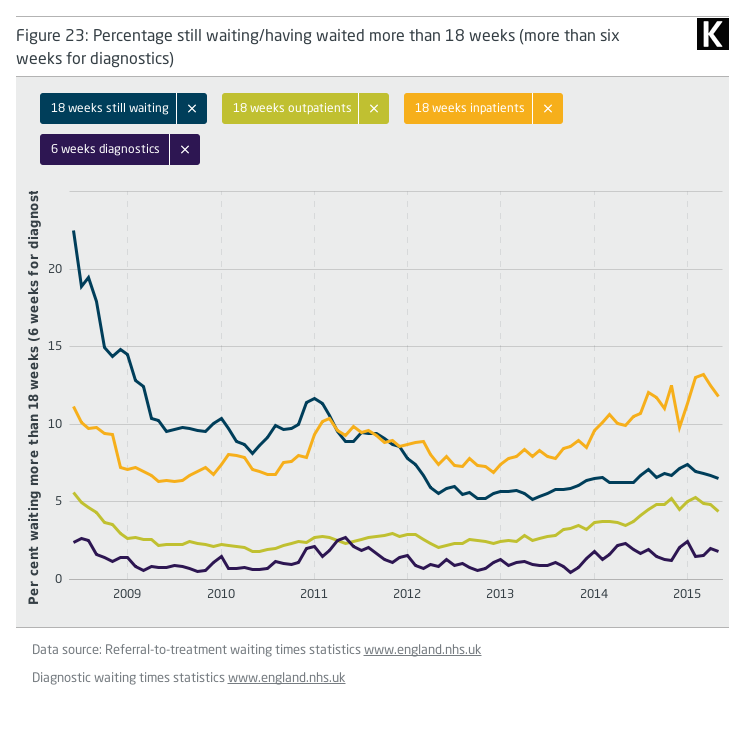 The total elective waiting list increased for four months in a row from January to May 2015 and furthermore is now at its highest since February 2008 at 3.17 million. However, this still does not include several trusts that have not been reporting their waiting lists. Including these, NHS England estimate the true waiting list in May 2015 to be around 3.4 million (Figure 24). 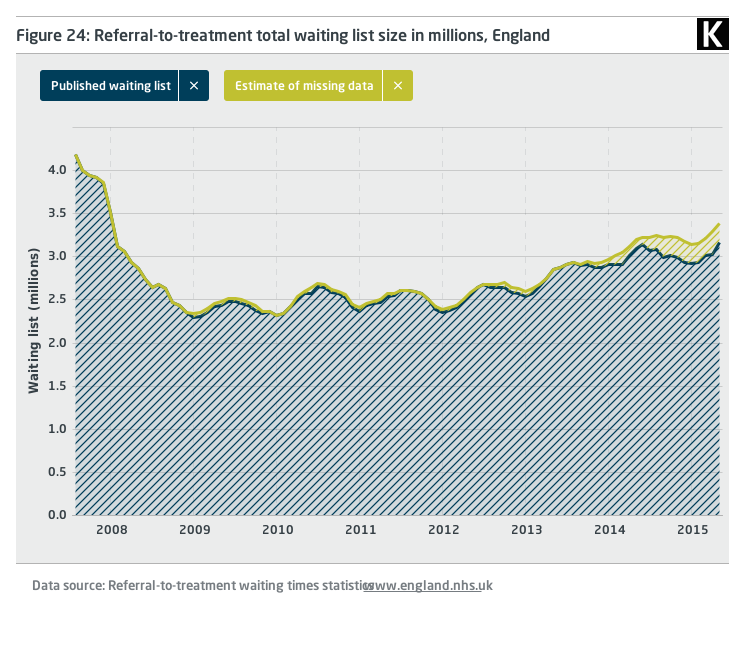 The overall waiting time target for cancer treatment is that 85 per cent of patients receive treatment for their cancer within 62 days of urgent referral from their GP. This was met from quarter 4 2008/9 until quarter 4 2013/14 , when it went below the target. In the latest quarter (quarter 4 2014/15 – from January to March 2015) performance reduced to 82.3 per cent, the lowest on record (Figure 25).

It is not known how the recent change in cancer guidelines from NICE will affect these waiting times. Under the new guidance GPs can send patients directly for some diagnostic tests where previously they had to be sent to see a specialist first (National Institute for Health and Care Excellence 2015). The new rules mean that more patients will receive a diagnosis more quickly, but it is uncertain what impact these additional tests will have on the queue of patients needing diagnostic tests and total referral-to-treatment times. 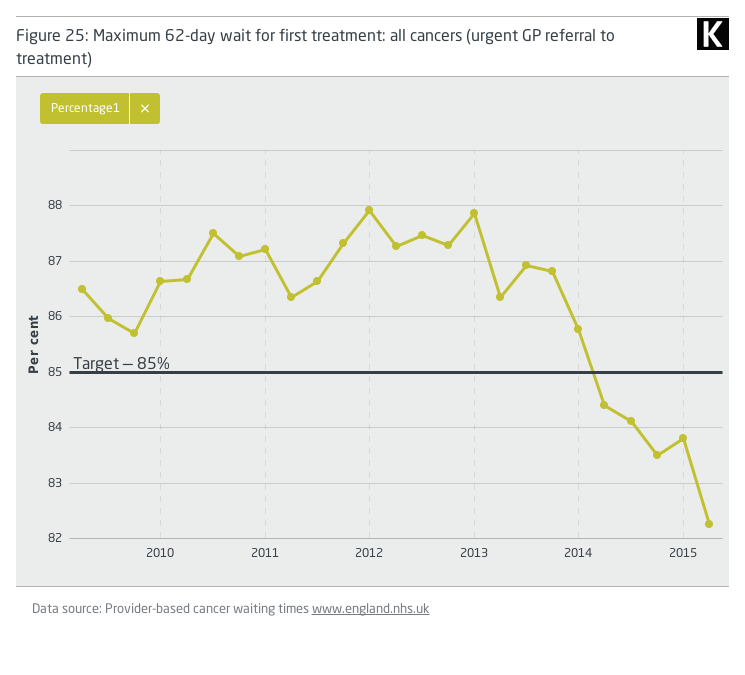 In quarter 1 2015/16 the proportion of patients spending more than four hours from arrival to discharge, admission or transfer in all A&E departments was 5.9 per cent (more than 337,100 patients) – an improvement on the previous quarter but the highest figure in quarter 1 for more than a decade (Figure 26). Compared to the same quarter last year there were an additional 52,540 (18 per cent) patients who spent more than four hours in A&E.

For all providers, 32 per cent missed the four-hour target in the first quarter of 2015/16, the highest proportion for this quarter seen since this data has been collected.

For major A&E departments overall, just under 9 per cent of patients waited more than four hours and less than a third of providers achieved the target.

Share
Save image
Figure 26: Percentage waiting more than four hours in A&E from arrival to admission, transfer or discharge 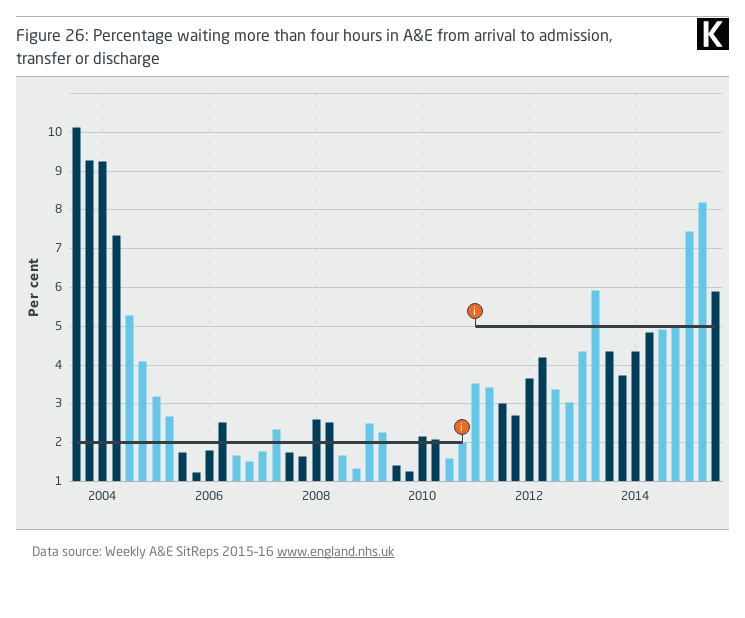 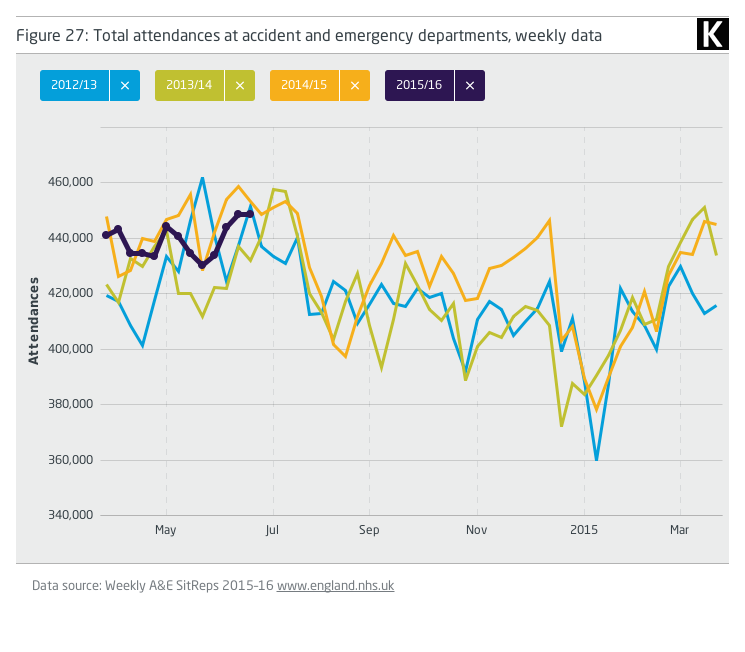 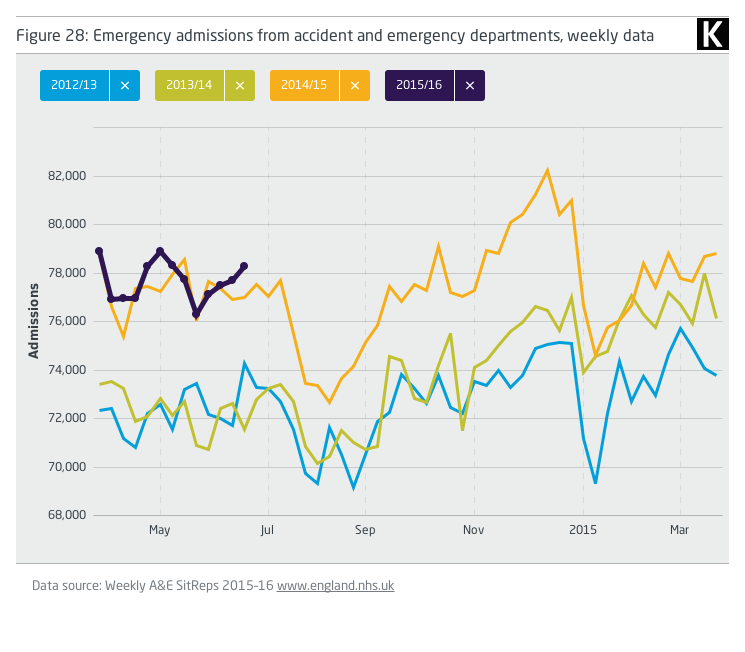 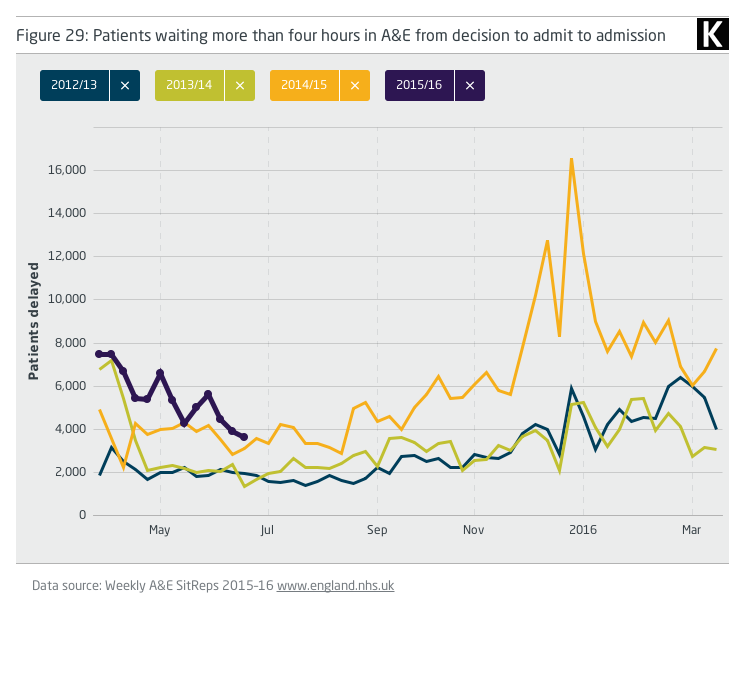 At the end of May 2015 there were 4,970 patients delayed in hospitals. This is up on previous months and 10 per cent higher than the same month last year (Figure 30). 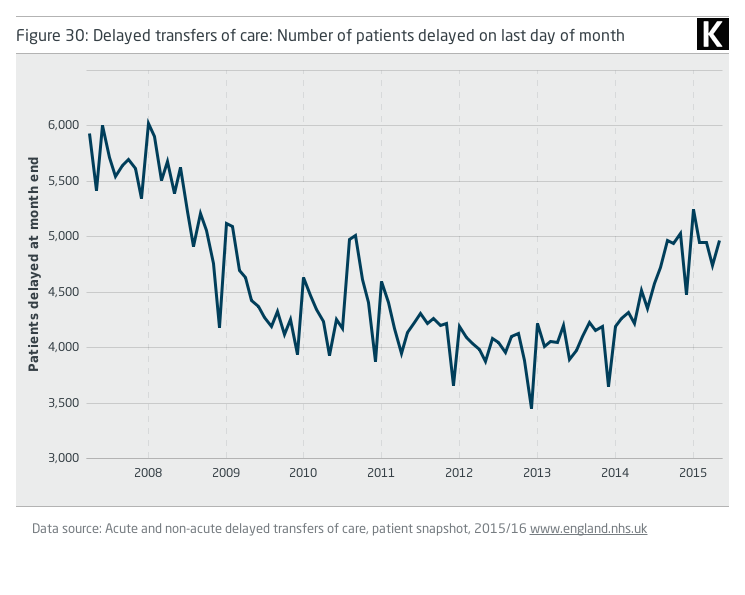 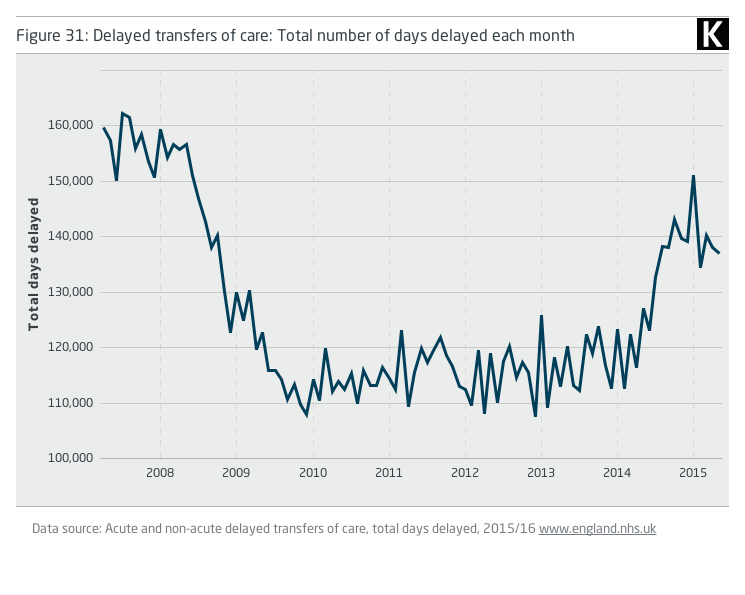