Numbers of C difficile infections decreased over the latest quarter, from 443 in September 2014 to 415 in November (Figure 23).

There was a record low-number of MRSA infections in November 2014 of 15. This follows previous months of low counts for MRSA (Figure 23).

This quarter, levels of infection for MSSA, the strain of S aureus that is sensitive to methicillin, were higher than the same quarter last year, but the trend is relatively stable, and seasonal variance indicate this is an expected pattern (Figure 23).

The number of reported E coli infections continues to be subject to large seasonal variations. In the latest quarter numbers had once again dipped below 3,000 cases ahead of an anticipated drop in recorded infections over the winter period (Figure 23). 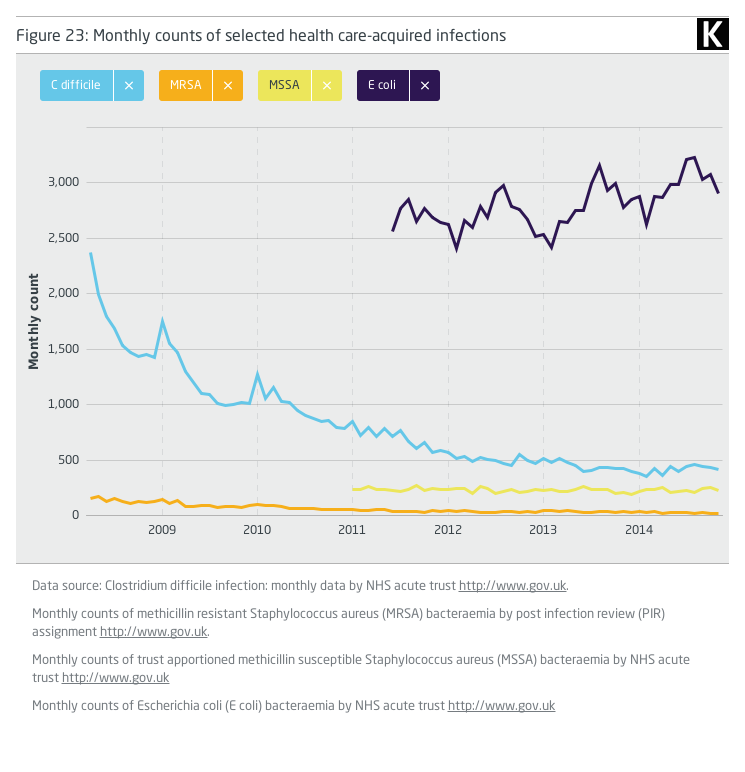 The total full-time equivalent (FTE) number of NHS staff was just over 1.064 million in September 2014. This is higher than the previous month and the highest since this data was reported in September 2009. 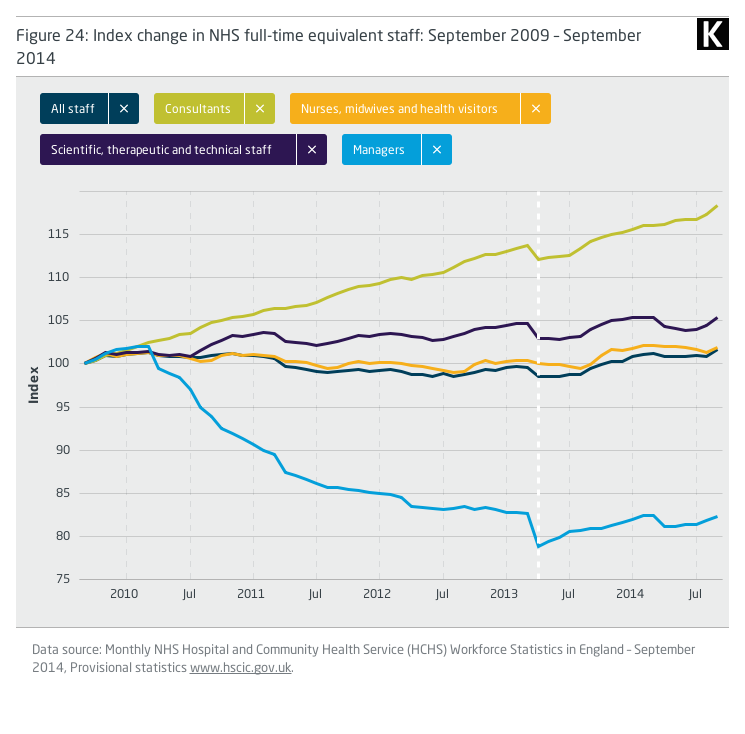 With the Secretary of State for Health having extended the deadline to carry out an additional £250 million worth of elective activity over the summer months to the end of the year (December 2014 data released in February 2015), we are still in a period of ‘managed breach’.

The latest figures reflect this with waiting times for both non-admitted (outpatient) and admitted (inpatient) patients breaching in November 2014 (Figure 25).

The proportion of admitted patients waiting longer than 18 weeks rose to 12.5 per cent, the highest since this target was introduced (Figure 25).

The proportion of non-admitted patients waiting more than 18 weeks rose to 5.4 per cent. This is the first breach in the non-admitted referral-to-treatment (RTT) target since the summer of 2008 (Figure 25).

The number of patients still waiting to begin their treatment (both admitted and non-admitted) reduced fractionally to 6.9 per cent. This suggests the managed breach is having some positive impact (Figure 25).

However, the targets of the managed breach were to have all RTT standards met by December 2014 and have 115,000 fewer patients waiting more than 16 weeks to begin treatment. While in November 2014 there were 9,000 fewer patients waiting 16 weeks or more to begin treatment, it seems very unlikely the remaining reduction will have been achieved or that breaches in other parts of the patient pathway will have returned to target in December (Figure 25). 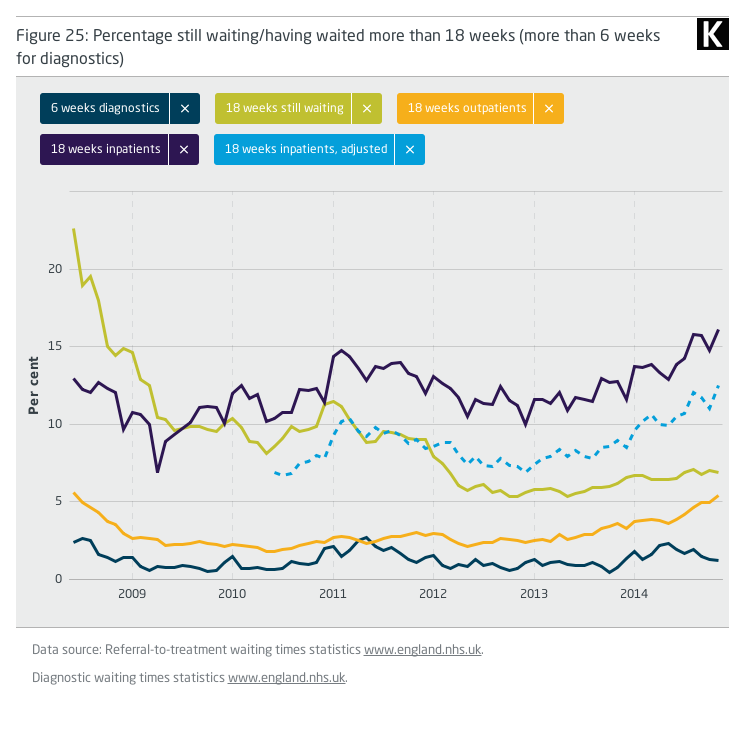 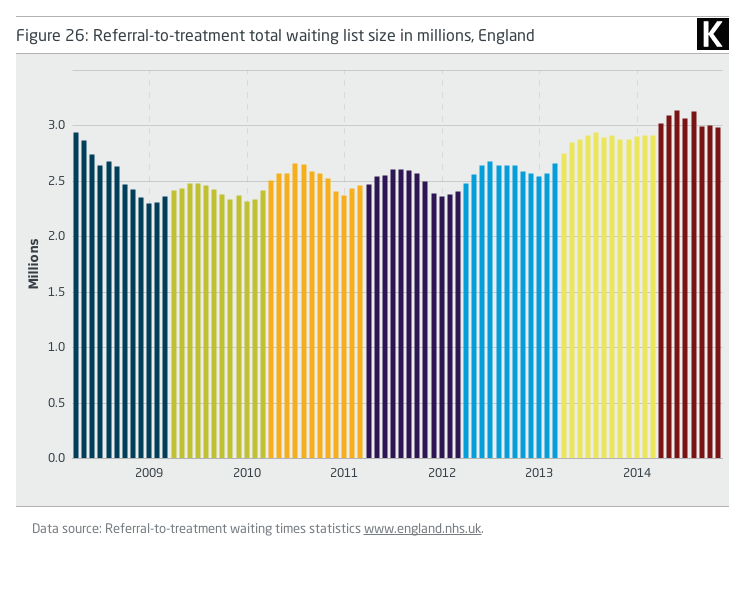 There are further waiting list targets for cancer care. The standard for a maximum 62-day wait from urgent GP referral through to first treatment is useful to monitor as it measures how well the whole cancer pathway is able to respond to the demands placed upon it.

The standard is that 85 per cent of patients receive treatment for their cancer within 62 days of urgent referral from their GP. This standard had been met since quarter 4 2008/9 (from when we have data) but since quarter 4 2013/14 performance has been below the target. In the latest quarter (quarter 2 2014/15 – from July to September 2014) performance has slipped further to 83.5 per cent, the lowest on record (Figure 27). 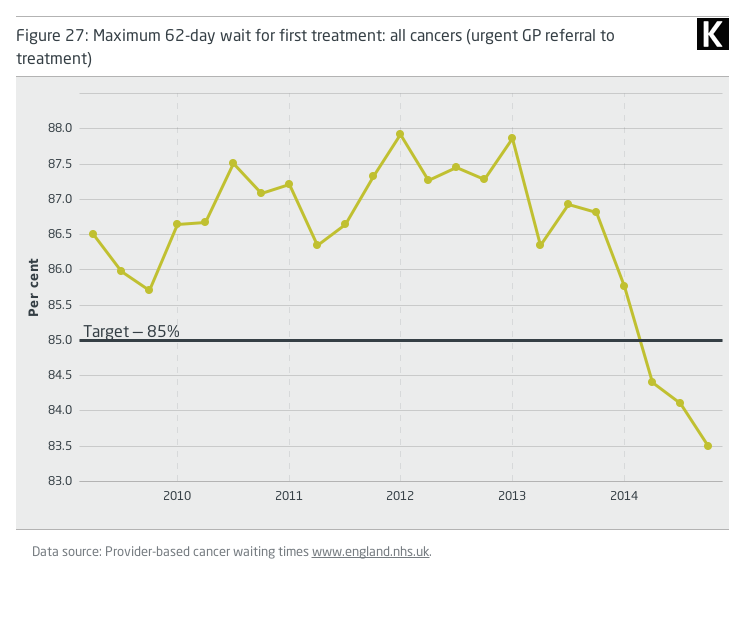 In quarter 3 2014/15 the proportion of patients waiting more than 4 hours from arrival to discharge, admission or transfer in all A&E departments was 7.4 per cent (more than 414,000 patients) – a 47 per cent increase on the previous quarter and the poorest performance since quarter 3 2003/4 (Figure 28).

Share
Save image
Figure 28: Percentage waiting more than four hours in A&E from arrival to admission, transfer or discharge 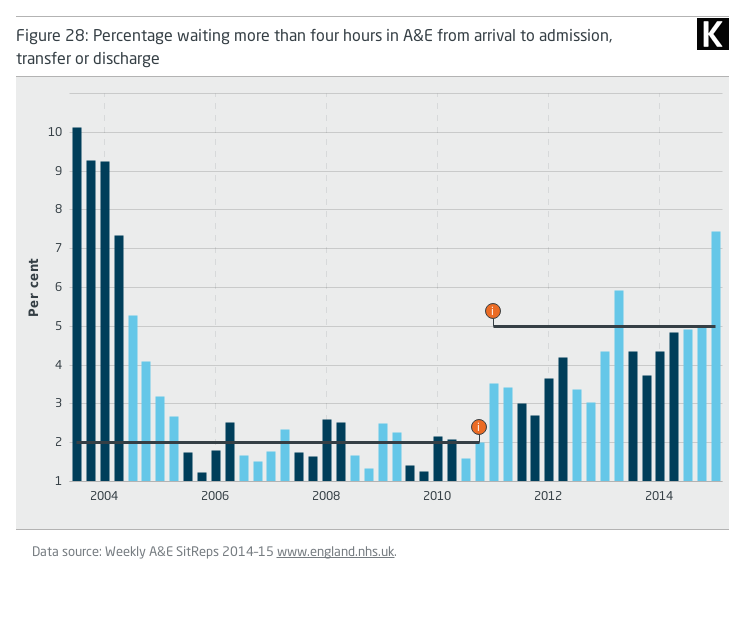 For all providers nearly 50 per cent missed the 4-hour target in the third quarter of 2014/15, the highest we’ve seen since we started recording the data. 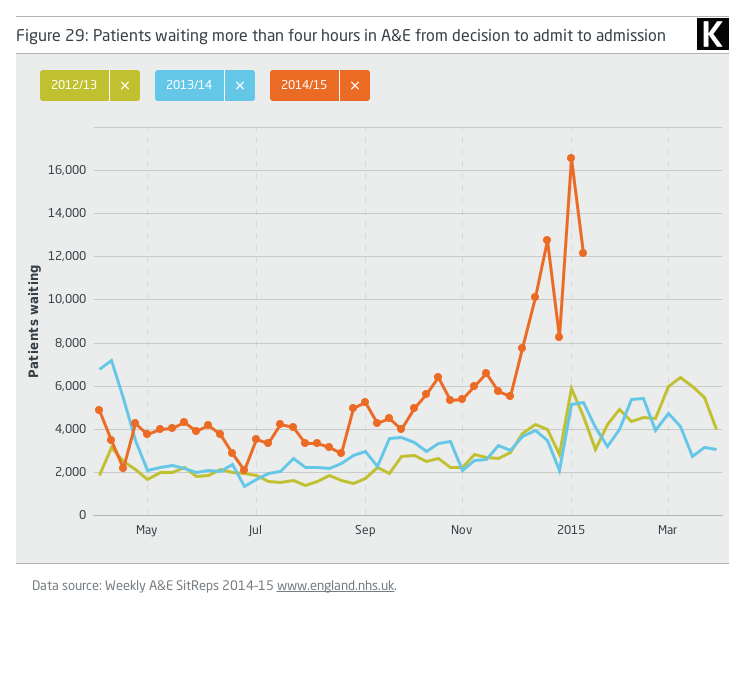 The latest weekly data for all types of A&E departments show that performance continued above target into the first two weeks of 2015, with national performance for both weeks showing more than 10 per cent of patients waited more than 4 hours (figure 30). For major A&E departments (which treat about 65 per cent of all patients), the 4-hour target has now been missed for the past 78 weeks. 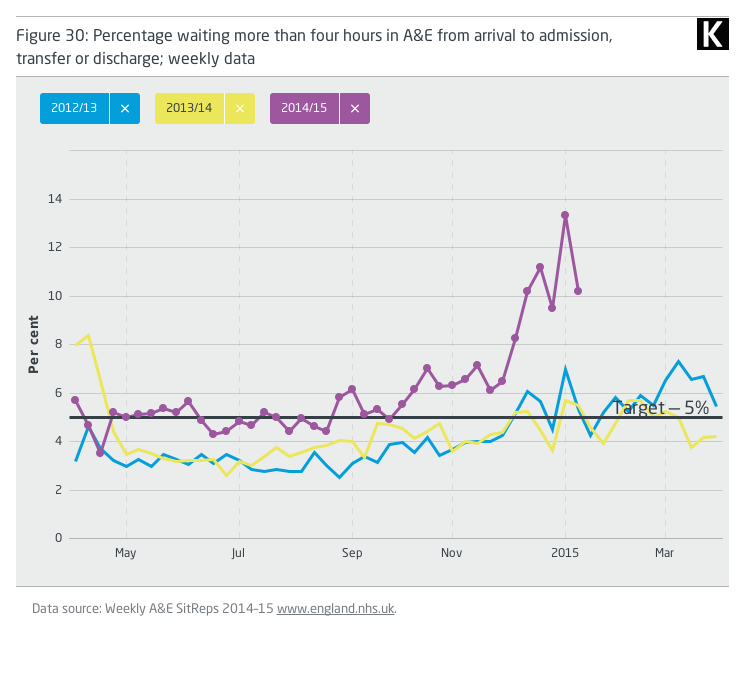 Share
Save image
Figure 31: Average number of patients delayed per day each month 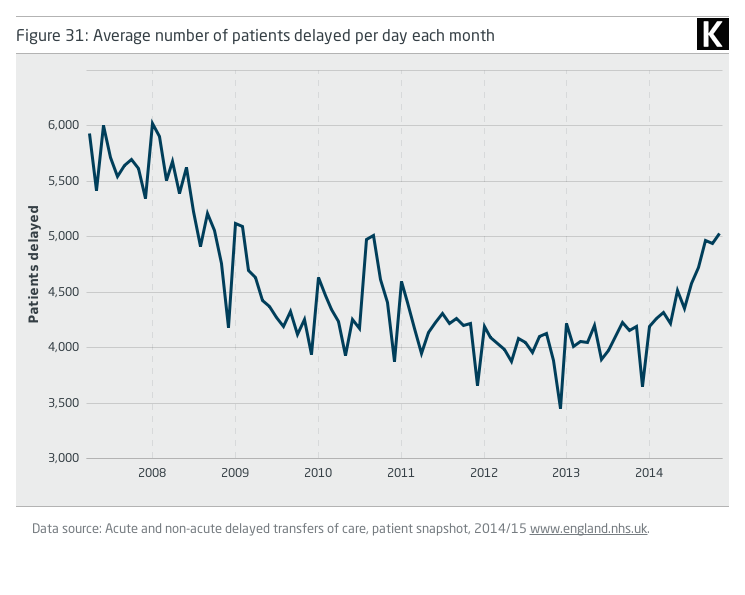 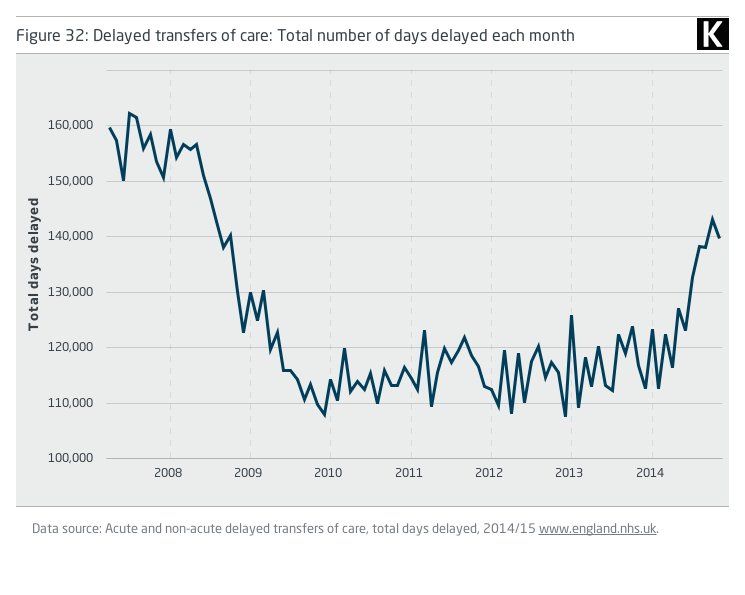