The historic decreases in the number of cases of C difficile have remained low over the last year or so. The most recent data for August 2014 shows an apparent upturn in trend, but this reflects the usual seasonal variance for this time of year (figure 23).

August 2014 saw the fifth month in a row for monthly counts of MRSA below 30, a historic low. To put this into perspective, there are more than 2 million patient contacts per month in the NHS in England, which means that infection rates for MRSA are now below 0.001 per cent (figure 23).

Although not part of the national targets, there are many other health care-acquired infections (HCAIs). For example, numbers for MSSA, the strain of S aureus which is sensitive to meticillin, remain broadly flat. There were 239 reported cases in January 2011; by August 2014 there were 205 (figure 23).

Monthly counts of E. coli appear to be increasing through to August 2014. However, the data is very sensitive to seasonal variations. Additionally the monthly data collection for acute trusts only began in June 2011, so there could be more trusts reporting numbers each month, distorting any real increases (figure 23). 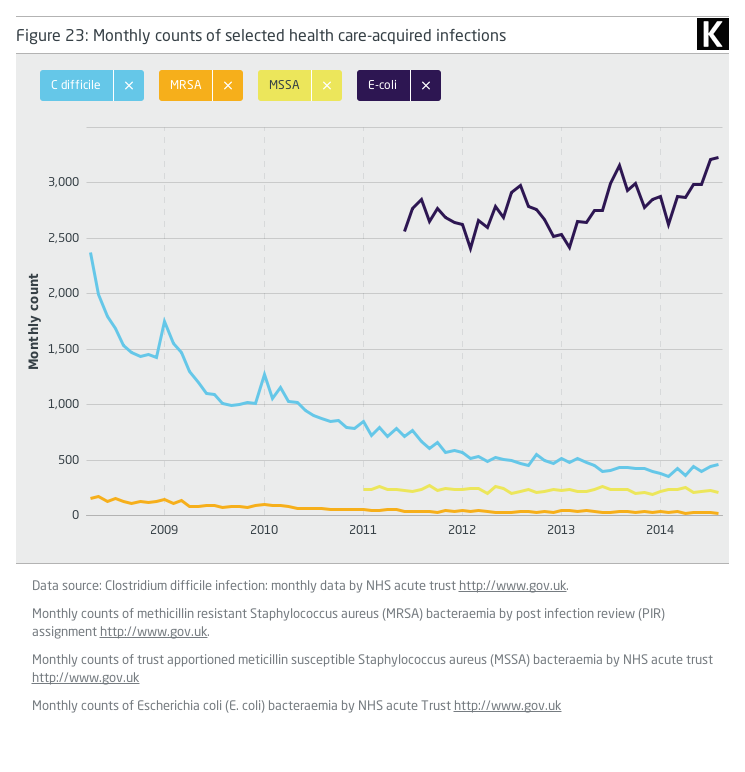 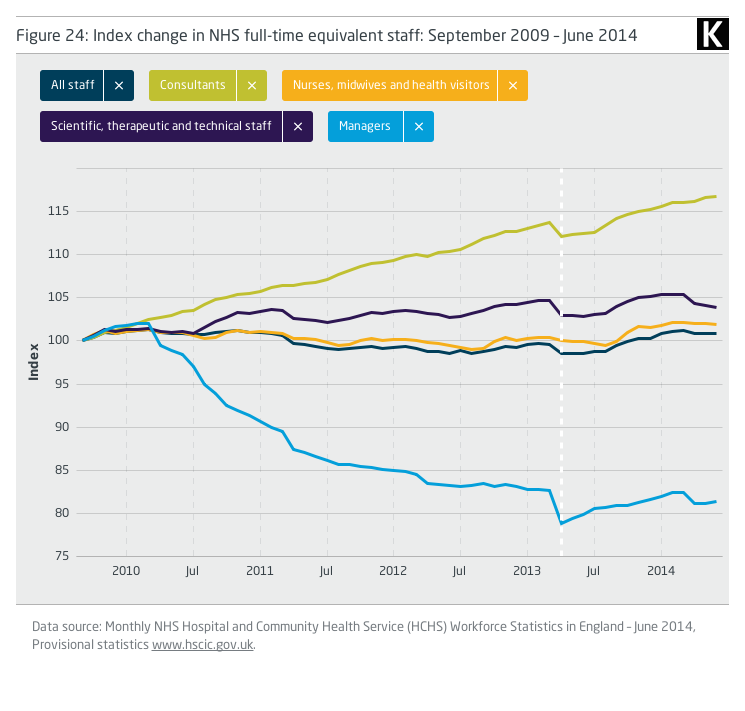 Taking a longer view (and including GPs, whose numbers are only recorded annually) shows that the numbers of all health care staff groups have increased since 2003 – although there have been large reductions in managers since 2009, and for all groups apart from consultants, increases occurred mainly up to 2009 or 2010 (figure 25). 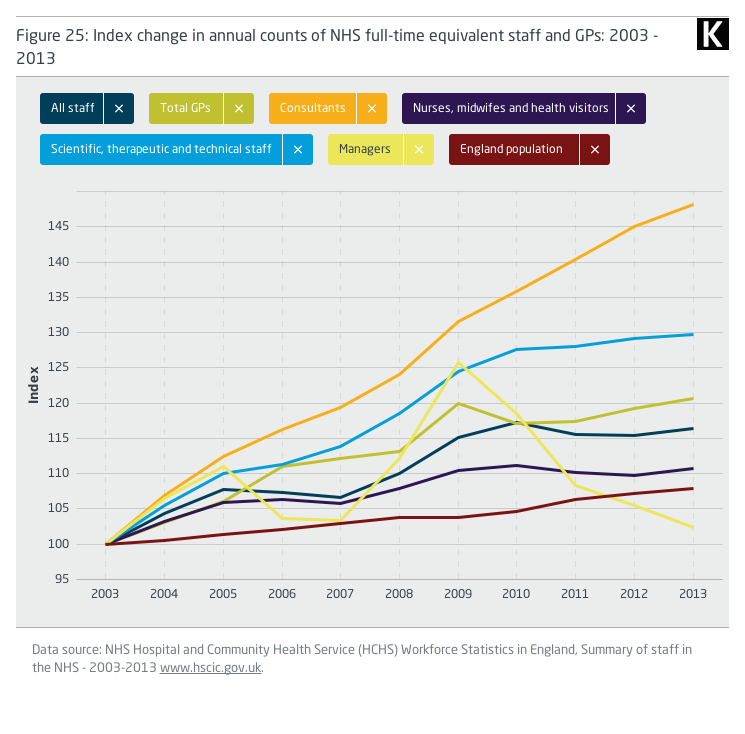 In June, the Secretary of State for Health announced extra funding of £250 million for trusts to carry out additional elective activity during the summer months to reduce the total number of patients waiting for more than 16 weeks by 115,000 nationally, thereby reducing the number of people still waiting for more than 18 weeks to the level in January 2013 (figure 26).

Treating more people who have already waited for more than 18 weeks automatically means increasing the number of breaches of the 18-week target for admitted and non-admitted parts of the target. This ‘managed’ breach is evident from the latest waiting times figures. The proportion of patients waiting for more than 18 weeks for admitted treatment has increased to more than 12 per cent – the highest proportion since this new adjusted standard was introduced four years ago (figure 26).

However, there has been no compensating decrease in the numbers or proportions of patients still waiting either for admission as an inpatient or for their first attendance at outpatients. Indeed, the numbers still waiting for more than 16 weeks (the time targeted under the managed breach initiative) has increased by more than 71,000 to nearly 321,000 – the highest since the summer of 2011 (figure 26). 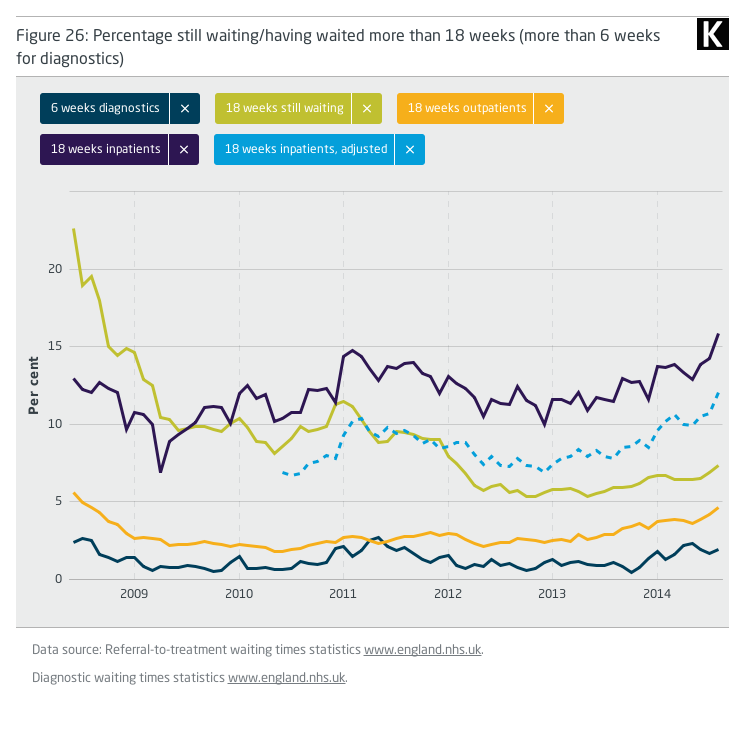 In August 2014 the total waiting list in England stood at 3.13 million patients, an increase on the previous month and only a small decrease from June (figure 27). Furthermore, NHS England has estimated that the total waiting list size could be up to 3.3 million patients if all non-reporting trusts submitted their missing data (NHS England, 2014c). 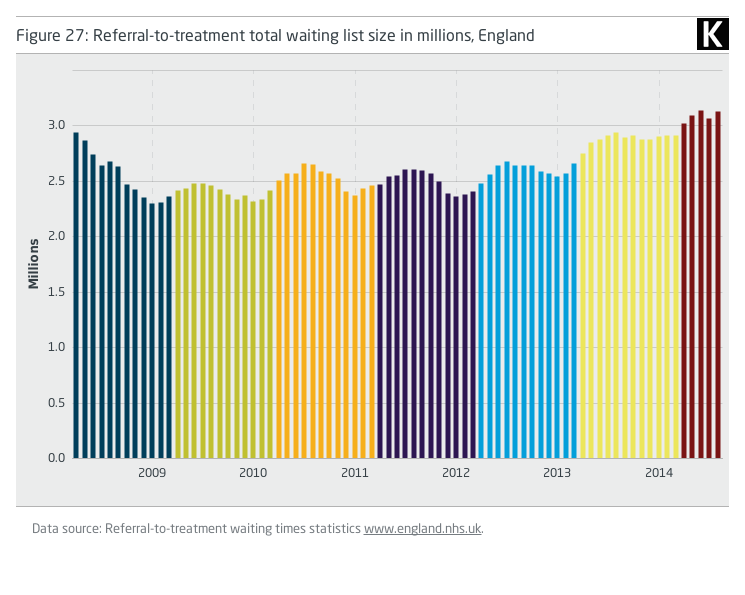 The target that 85 per cent of patients should wait no longer than 62 days from an urgent GP referral to first definitive treatment for cancer was missed for the second consecutive quarter in a row in quarter one 2014/15 (figure 28). 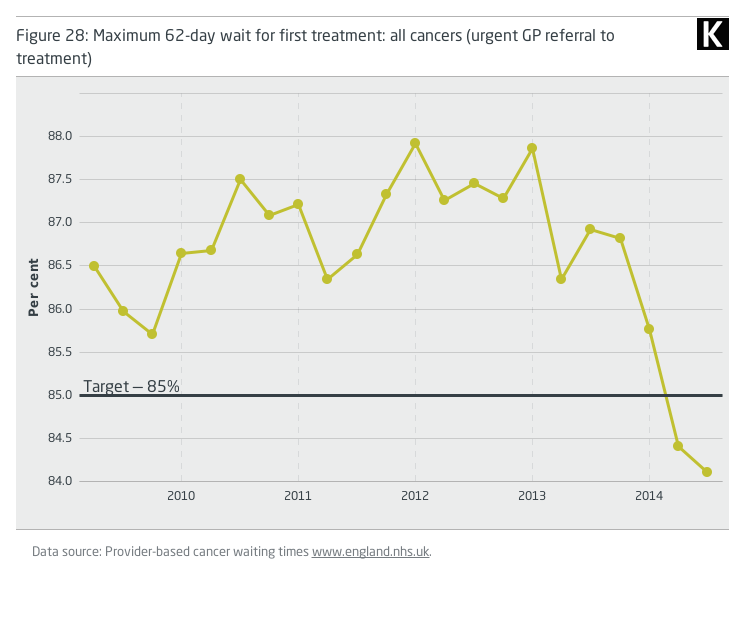 The proportion of patients waiting more than four hours from arrival to admission, transfer or discharge in the second quarter of 2014/15 was 5.02 per cent – fractionally missing the 5 per cent target, and the highest second quarter level since the introduction of the revised target (figure 29).

Of all the organisations reporting against the A&E standard, 28 per cent reported missing the four-hour target in this quarter, the highest second quarter figure proportion for a decade, and counter to the usual trend for a reduction against the previous first quarter figure.

The latest weekly A&E waiting times data (for the week ending 19 October) shows that across all types of departments, 7 per cent of patients waited more than four hours (figure 30). However, for major A&E departments (which treat around 65 per cent of all patients), the four-hour target has now been missed for the past 66 weeks. 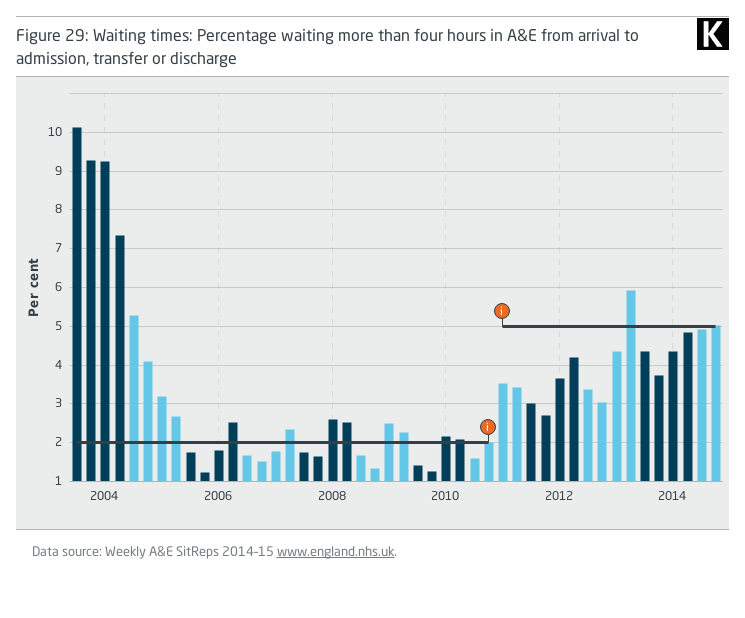 Share
Save image
Figure 30: A&E weekly performance against target that no more than 5 per cent of patients wait longer than four hours from arrival to admission, transfer or discharge. Weekly data: November 2010-October 2014 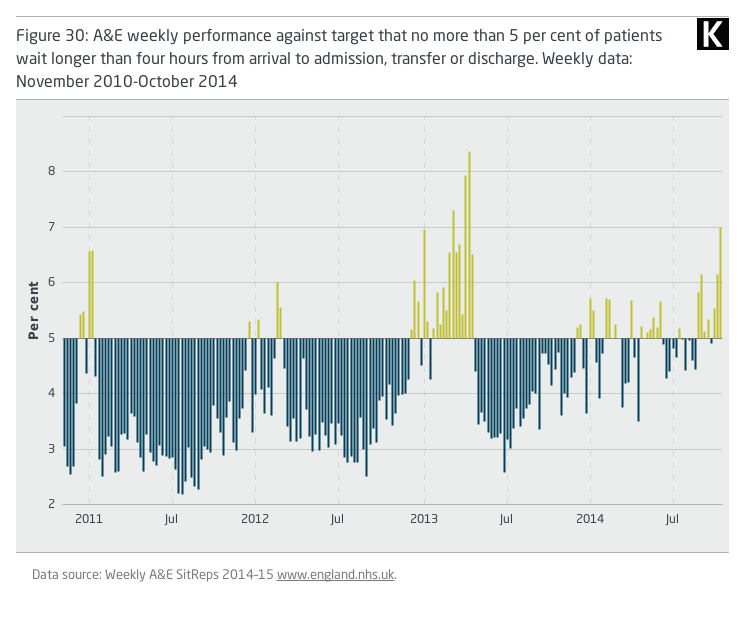 Seasonal variations are still apparent in the delayed transfers of care data. But following month-on-month increases from July to September this year there were 17.5 per cent more patient delays and 16 per cent more delayed days compared to September last year. Splitting this by the type of care patients were receiving shows that acute delays continue to increase while delays for non-acute have flattened over the last year (figures 31 and 32).

This change in the data now reflects a longstanding trend with our survey of finance directors, who have reported that delayed transfers of care have been a problem since we started asking them about their main concerns for their organisation. 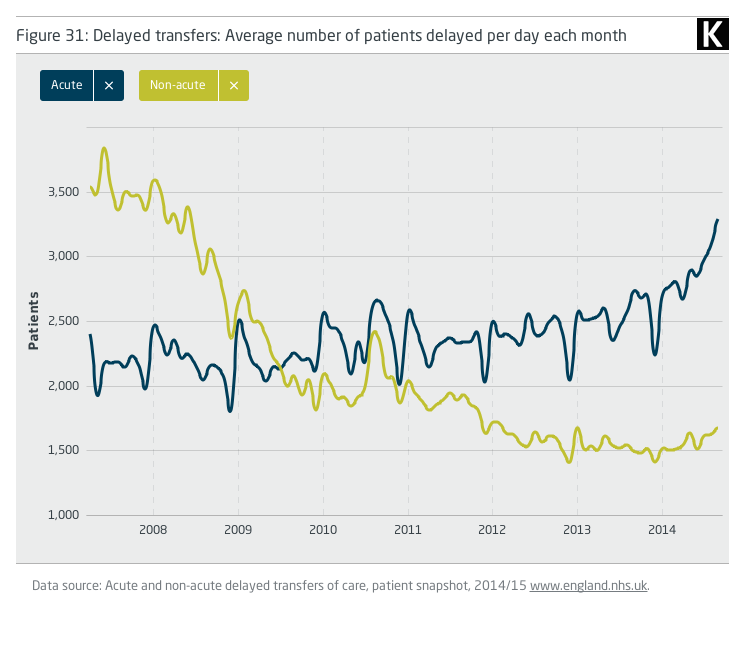 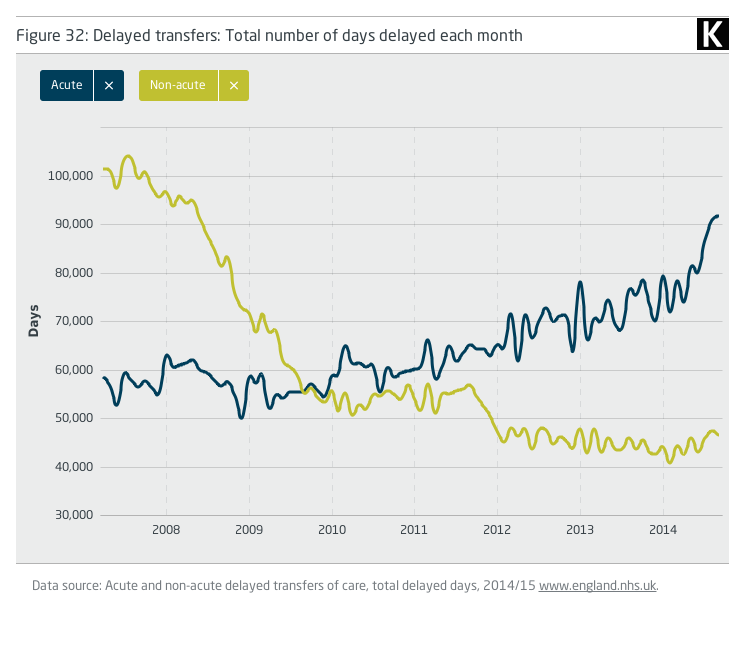