The lowest monthly total of C difficile (382) for more than five years was achieved in January 2014. However, while the total number of cases over the year to date (4,216) represents a 22.4 per cent decrease on the previous year, with only two months left before the end of 2013/14 it will be very difficult to meet this year’s target reduction of 29.6 per cent (figure 28).

There were 36 cases of MRSA in January 2014, an increase on the previous month but a decrease on the same month last year. Annual counts for 2013/14 look likely to be very similar to 2012/13; the count for the year to date shows that the numbers for this year are only 1 per cent below levels last year (figure 28). 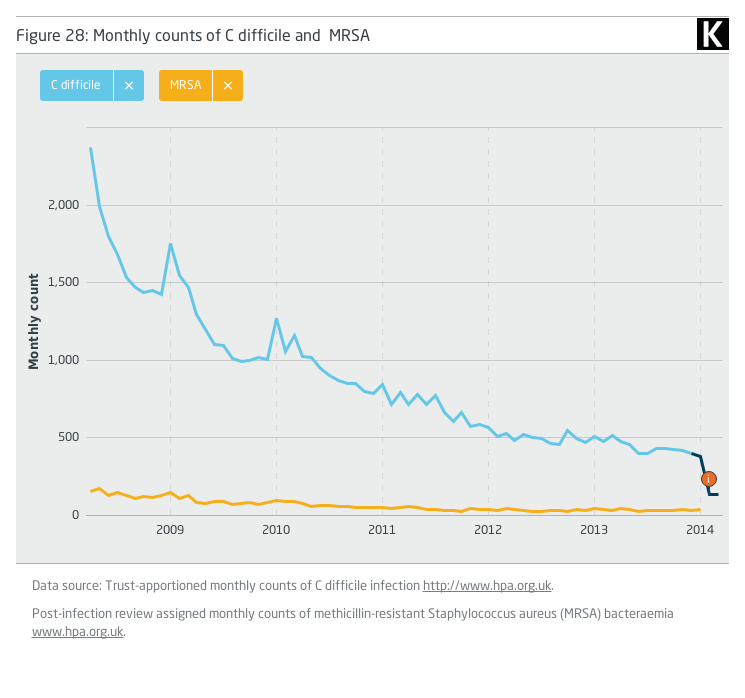 Staff numbers increased for the sixth month in a row in December 2013, there are now 18,500 more full-time equivalent staff compared to June 2013 (figure 29).

Following calls from Robert Francis to revisit the idea of minimum staffing levels on hospital wards, staff numbers for all groups – but particularly for nurses – increased markedly in September 2013 (figure 30).

Since this initial surge numbers have abated slightly, indeed numbers for qualified nurses, midwives and health visitors decreased this month, although remain at their highest level for more than four years. 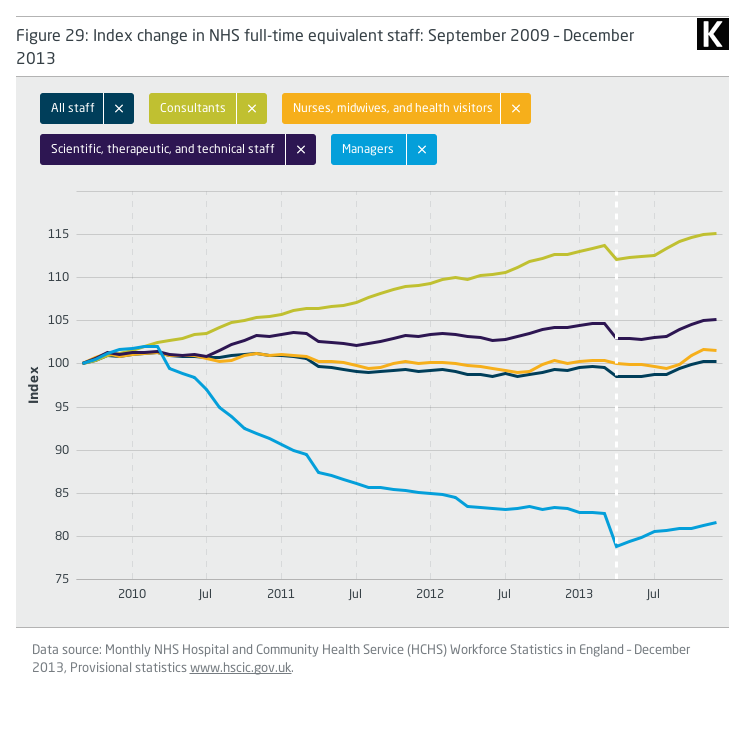 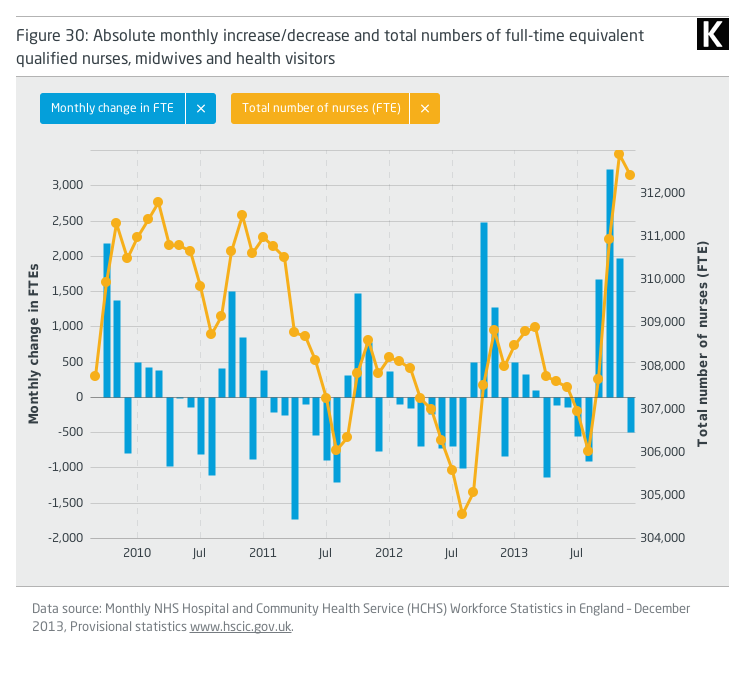 Referral-to-treatment waiting times have increased for all lists (figure 31).

At 9.6 per cent, the proportion of patients waiting longer than 18 weeks on inpatient waiting lists is close to its 10 per cent target, the highest it has been for 2½ years.

The proportion of outpatients waiting longer than 18 weeks for treatment rose to 3.8 per cent in January, the highest proportion for 5½ years (though still within the 5 per cent target).

The proportion of patients still waiting after 18 weeks has increased to 6.7 per cent, the highest proportion for two years, but is still within its target (8 per cent).

Growth in the length of the waiting list would not be a problem if the flow off the list kept pace. However, the ‘time to clear the waiting list’ – a measure of flows onto and off the waiting list – has been increasing since June 2011. The clearance time of more than 11 weeks in December 2013 was the highest since May 2008.

Everyone counts (NHS England 2013) introduced a zero-tolerance approach to patients waiting more than a year on referral-to-treatment waiting lists. By November 2013 the number of patients waiting longer than a year for treatment had reduced to an all-time low of 218. However, in January 2014 this crept back up to 430. 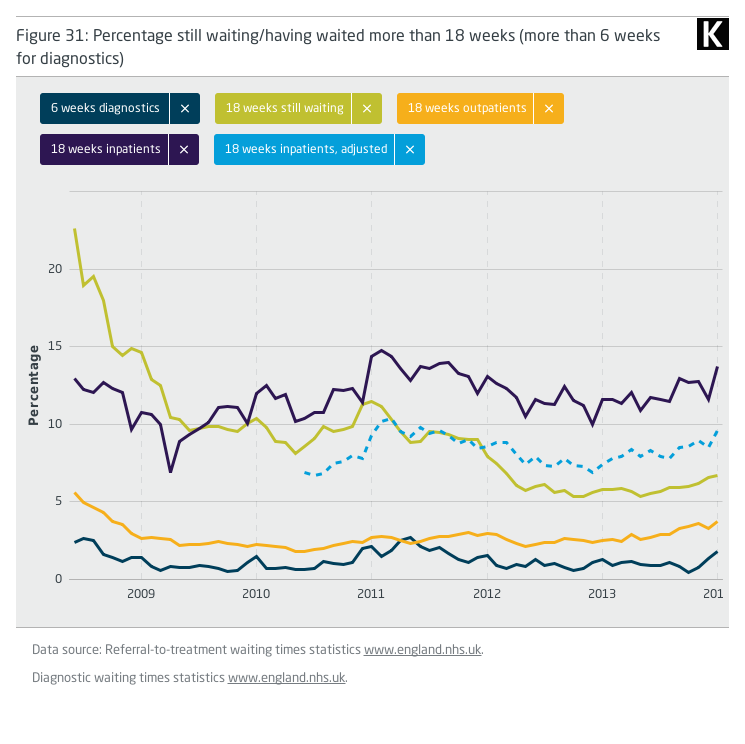 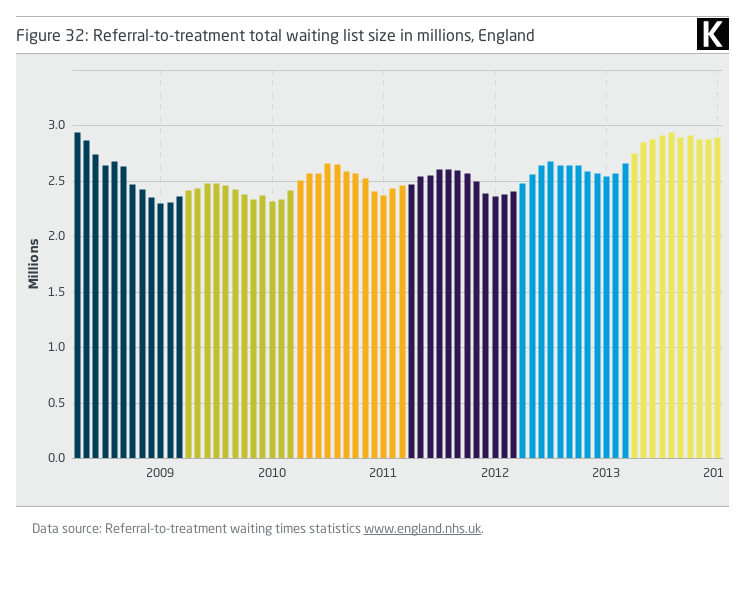 In quarter 4 2013/14 the percentage of people waiting longer than four hours from arrival to admission, transfer or discharge was 4.8 per cent. This is an increase on quarter 3 2013/14 but below the performance target of 5 per cent (figure 33).

The latest quarter’s figure is also down on quarter 4 2012/13 where more than 5.9 per cent of patients waited longer than four hours. 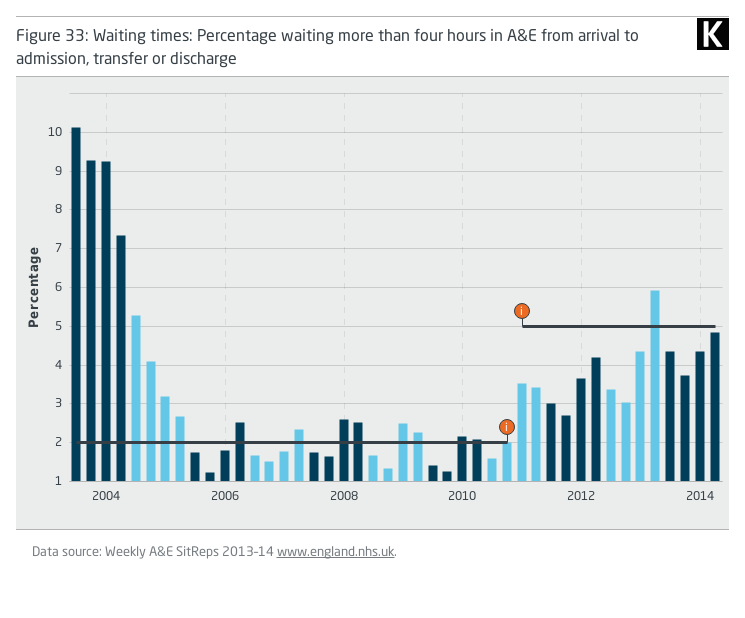 Weekly data shows that the national average breached the 5 per cent target in five out of the thirteen weeks that made up the final quarter of 2013/14 (figure 34).

This is much improved over quarter 4 2012/13 where the target was breached in twelve out of thirteen weeks.

Share
Save image
Figure 34: A&E weekly performance against target that no more than 5 per cent of patients wait longer than four hours from arrival to admission, transfer or discharge. Weekly data: November 2010-March 2014 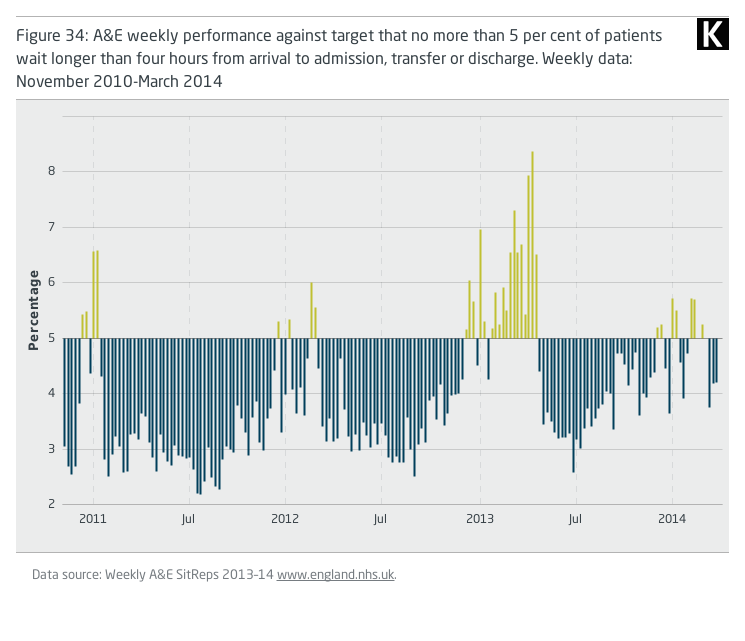 This is fractionally higher than in quarter 3 of the same year but a reduction on the quarter 4 figures from 2012/13.

The composition of providers masks high variation, however. More than 60 per cent of type 1 departments (major consultant-led departments) missed the 5 per cent target in quarter 4.

Share
Save image
Figure 35: Waiting times: Percentage of providers reporting more than 5 per cent of patients waiting longer than four hours in A&E departments from arrival to admission, transfer or discharge 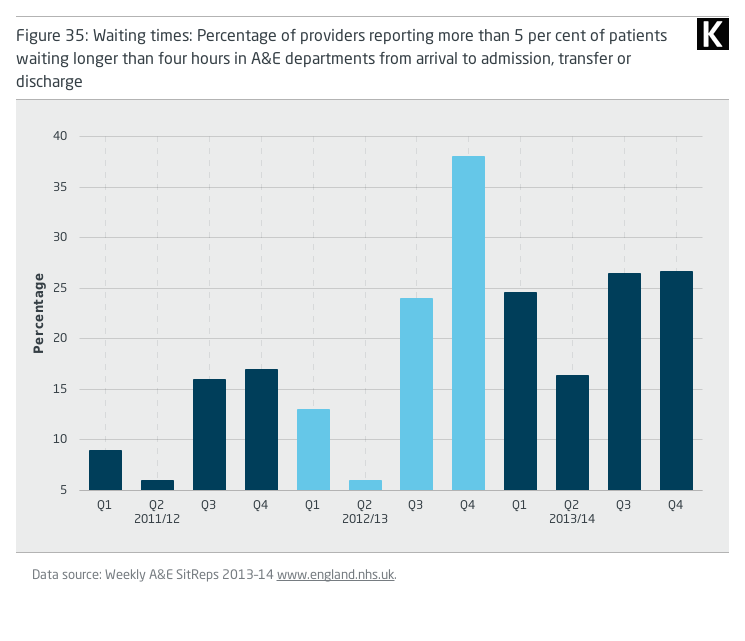 ‘Trolley waits’ (those patients delayed for more than four hours in type 1 (major) A&E departments from decision to admit to admission) were up to 5.5 per cent in quarter 4 2013/14 (figure 36).

Share
Save image
Figure 36: ‘Trolley waits’: The proportion of patients spending more than four hours in major A&E departments from decision to admit to admission into hospital 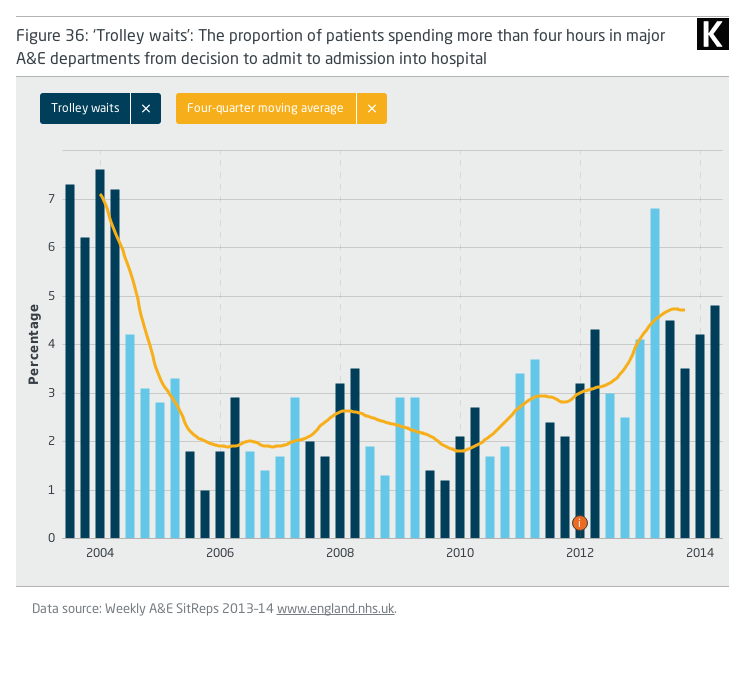 Following seasonal reductions in December 2013, recent trends in both patients and days delayed were maintained in January and February 2014 (figures 37 and 38).

A running 12-month count of patients and days delayed shows that current rates of delayed transfers are higher than they were a year ago.

Acute and non-acute refers to the treatment these patients were receiving when the delay occurred, acute being more intensive. Acute delays now account for 65 per cent of patients delayed and 64 per cent of days delayed.

Splitting the data by the organisation responsible for the delay shows that 61 per cent of patient delays and 71 per cent of days delayed in February 2014 were due to the NHS, rather than social care.

We have previously commented on the disparity between the measurement of delayed transfers and NHS concerns about them (Thompson 2014) – once again this quarter they were the second top concern for NHS trusts.

The latest Care Quality Commission survey of inpatients (2013) shows a large number – 41 per cent – of patients self-reporting a delay in discharge of some kind. Though many of these delays are small (48 per cent under 2 hours), this still roughly equates to 2.3 million patient delays per year. This compares to the current delayed discharge methodology, which is capturing around 1.5 million delayed patients per year, highlighting again how much work is still needed to fully understand the extent of delayed discharges. 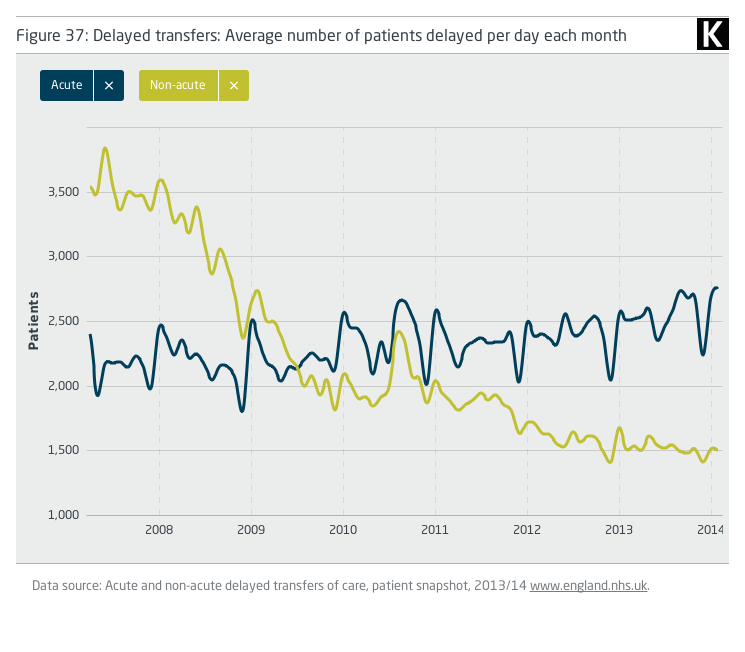 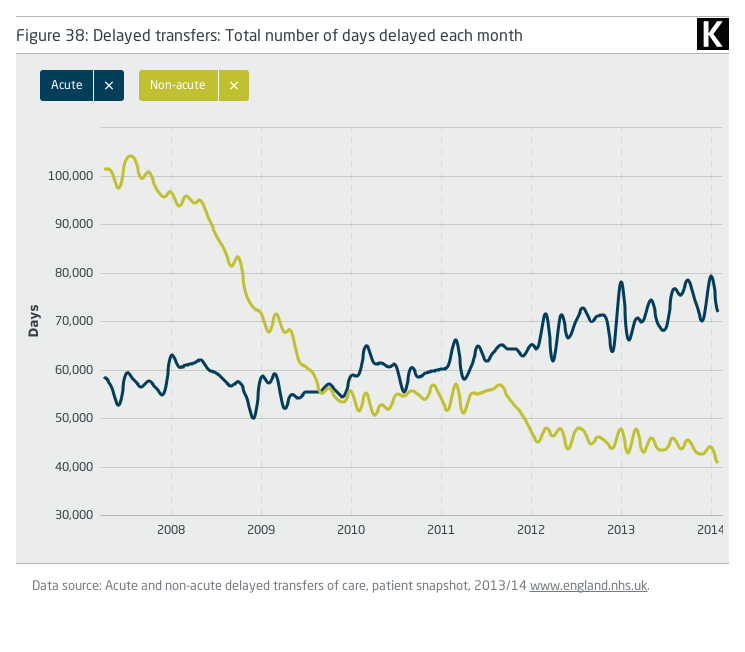